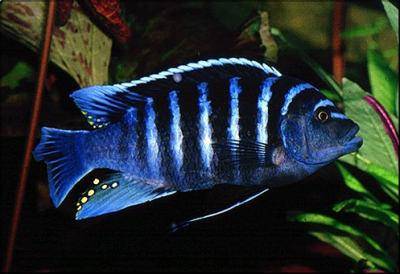 The Afra is omnivorous. They will accept a variety of flake foods, especially one that contains spirulina. In the wild, the males will feed on algae from the rocks while the females feed on plankton in open waters.

Afras are mouthbrooders. The female carries the brood in her mouth for approximately 3 weeks before releasing them to fend for themselves. This cichlid produces smaller broods than is typical for most mouthbrooders.

The Afra is from Lake Malawi near Likoma Island.

A male Afra will defend one large rock as its own territory. He feeds upon the algae growing on his rock. The female Afras hang out in open water and eat plankton. Afras often get mistook for the Pseudotropheus demasoni which are similar in both looks and size. The difference is Pseudotropheus cichlids have bicuspid teeth while Afras have a unicuspid tooth. Afras come in a variety of color combinations.