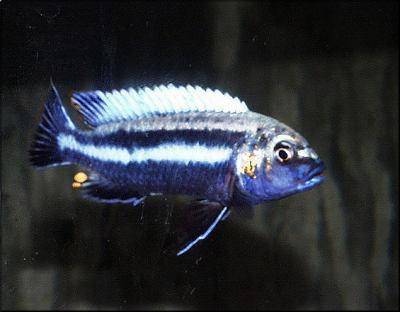 The Purple mbuna originate from Eastern Africa, namely Lake Malawi where they inhabit the rocky areas in the middle to lower levels.

The purple mbuna displays a dark blue body colouration which is broken by turquoise flecks that run along the top. They also display a dark stripe than runs through they eye right to the caudal fin, above this there is also a parallel white line. Mature male specimens should reach an average length of just under 6 inches with mature females being slightly smaller. Like most mbuna they are classed as an aggressive species especially towards species of a similar size and colouration so should only be housed with species of a similar disposition.

They belong to the large family of Cichlidae with a Latin classification of Melanochromis vermivorus.

If cared for correctly the average lifespan of the Purple mbuna should be at least 6-8 years of age.

The Purple mbuna are a very active species and as such will require plenty of swimming space in the aquarium. The minimum sized aquarium that should be used will need to be at least 4 feet (120cm) in length and 18 inches (45 cm) wide. Rocky structures with hiding places should be added securely to the rear of the aquarium and sand is the preferred substrate (coral sand is ideal). The water temperature should range between 22-27°C (72-81°F) and the pH should range between 7.5-8.9 (using the coral sand for the substrate will help to stabilise the pH at this level).

As mentioned above these fish are highly aggressive so keeping more than one male in the tank can increase the aggression levels, it is far better to keep one male with several females. Using a harem will also disperse the amount of harassment from the males to each female.

Like all cichlids, the Purple mbuna is a high waste producer so ensure that a suitable filtration system is used for the water volume of the aquarium and back this up with regular water changes of at least 10% weekly.

Other species that make suitable tankmates are Haplochromis of a similar size or other mbuna with different colourations.

Not a difficult fish to feed. Allow algae to grow on the rock formations as they will graze on these. For the staple diet use a quality flake or cichlid pellets. These will need to be supplemented with treats of live or frozen meaty foods such as bloodworms or brine shrimp. They will also feed on small crustaceans such as snails, cockles or chopped mussels.

Once settled in the aquarium these fish can become quite prolific breeders. They are maternal mouthbrooders which means that the female parent will take the eggs into her mouth after spawning and incubate and hold the fry for up to 4 weeks. During the period of gestation, the female should not be stressed or she will eject the fry or eggs prematurely. She will hide away during this period and may not eat but once she feels that the very are large enough to be released she will allow them from her mouth.

The fry can be housed in the main aquarium but for a higher success rate it is advised to remove as many as you can and grow them on separately. Initially they can be fed on newly hatched brine shrimp gradually introducing the same diet as their parents. Once large enough to handle themselves, they can be returned to the main aquarium.