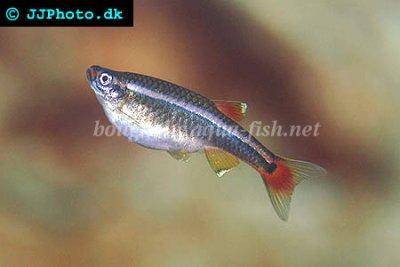 This is an omnivorous which means it will need plant and meat based food in its diet. The captive bred fish will not be picky and will accept a variety of live, dried and flake foods. Just choose flakes and granules which contain plants or algae. Also give them regularly bloodworms, Daphnia and Artemia to achieve the brightest colouring.

The differences between a male and a female are minimal. The males will be slightly slimmer and smaller, and their colours are a little brighter especially at their fins which are slightly more red and yellow than females’. Also the white stripe should be straight on a male and a bit curved on a female due to her rounder belly.

In aquarium trade there are only captive bred individuals. They scatter their eggs around the substrate and parents will eat them unless they breed in a well planted tank or in a tank with coarse-grained gravel which assures cover from greedy mouths. Mostly if you secure a well planted substrate, a larger crowd of this Minnow but no other fish, nor any snails, a large tank, neutral or slightly acidic water with 22°C (71.60°F) and some sponge filter with aeration, they should start breeding. If they cannot reach the eggs or small fry, the breeding process should be successful and the fry should survive just fine.

Eventually, in order to trigger spawning, one can start feeding fish frozen, live or flake food a bit more often to condition them, then separate 3 males, the ones that show off their fins the most, and 3 fat looking females (it can also be a ratio of two males and one female) into a smaller, dim lit tank with a spawning mop, larger glass marbles, a net with 0,5 cm (0.2 inch) large holes (the net has to be well secured so no adult can slip under it) or just fine leaved plants on the bottom, but there has to be some plant on the mop, glass, gravel or net and of course a sponge filter. Let them breed for few days and then remove the adult fish. The eggs should hatch in two or three days. The ones that turned white will not hatch and should be removed. The fry will eat infusoria or small portions of hard boiled egg yolks, later microworms, Artemia or small food for fry.

The White Cloud Mountain Minnow will live for up to 7 years in captivity by the right temperature. Warm water will cause shorter lifespan. Of course if you get them from an untrustworthy breeder who inbreeds them, the fish will probably be weak and die much sooner.

Tanichthys albonubes is endemic to areas around Hong Kong in South China. First they were found in White Cloud Mountains, however now the area is a popular tourist spot which affected the Minnow to such an extend, that for some time it was very much feared the species was extinct in wilderness. Luckily they were found in other areas like in north-east Vietnam, Guangdong province and Quang Ninh province. Still, they are an endangered species and China is trying to reintroduce the Minnow to its original habitat.

White Cloud Mountain Minnow will feel best in tanks with heavy vegetation and driftwood. Since this fish likes colder water it is important to choose plants carefully. Most plants in aquarium trade like warmer (tropical) water. The water can be either slow moving which is more natural for them, but they will tolerate faster water movement too. The water just has to move and it has to be well aerated. And always have a cover over the tank, sometimes males chase the females so enthusiastically, that the females jump out. They even can be kept outside in ponds (of course if you have required conditions there and the temperature will not rise over 24°C - 75.20°F) until the temperature doesn’t drop under 14°C (57.20°F) and they will eat mosquito larvae there, which will brighten their colour like nothing else.

Because this is a very peaceful fish, it will be a great addition to any community tank, as long as they're kept in a large shoals which consist at least of 10 fish. Just as the plants, the other fish need to like similar water temperature like Chinese banded shark - Myxocyprinus asiaticus, some tetras, danios or Rosy barb - Puntius conchonius, but never goldfish even if it likes cold water too.

Over the time, various forms were bred like long-finned or golden - albino.

The following questions were moved here on March 24th 2011 due to merging aqua-fish.net/answers with related pages.

What size tank is needed for 4 minnow fish?

Answer: Minnow fish produce a lot of waste so keeping them in too small a tank will create health problems, for 4 of these fish, the tank should be no smaller than 40 liters.

Why is my white cloud minnow showing signs of being sick?

Answer: These fish are one of the hardiest fish I know so the only 2 reasons that would make the fish sick are an uncycled tank or very poor water quality.