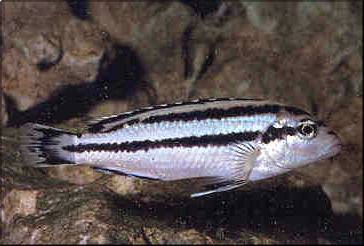 In the wild the Parallel Striped Mbuna feeds on plankton and algae. In your aquarium they will accept a variety of prepared and live foods. Spirulina should be incorporated into their diet along with prepared flakes. Brine shrimp, bloodworms, beef hearts and freeze dried proteins should be given sparingly for protein.

The females and juveniles will be white with black stripes and hints of yellow here and there. The male juveniles will darken as they mature. They take on a black color with dark blue stripes.

The Parallel Striped Mbuna is a mouthbrooding cichlid. In order to breed these fish there should be at least 3 females for each male. There should also be multiple caves for the male to choose from. The female will keep her fertilized eggs incubated in her mouth. She will release her fry when they are free swimming and ready to fend for themselves. This usually takes up to 25 days. The female will carry up to 50 young in her mouth at one time.

Melanochromis parallelus can live up to 10 years in the wild but more likely up to 8 years in a home aquarium.

This cichlid is from Lake Malawi in the East African Rift Valley. They can be found in rocky areas of the water off the northwestern coast of the lake.

Before this fish was determined to be a separate species from the Auratus Cichlid, this species was sold as the black and white Auratus. Later this cichlid was renamed the Melanochromis parallelus.