This page is devoted to raising Peacock cichlids and we'd love to hear your experiences or questions at the bottom of this page! The below-shown article describes diet, breeding, feeding, habitat, demands on water chemistry and we also focused on raising the fry.

Aulonocara is a genus of African cichlids most commonly known as Peacock Cichlids. They are very popular among the aquarium industry because of their brilliant colours and also because they are peaceful and fairly easy to care for. There are more than 20 known Aulonocara species and subspecies based on their variations of colours and characteristics. This eye catching fish is nicknamed the Peacock Cichlid for its similarity to the bird it is named after because the males are bright and colourful while the females are plain and not quite as attractive.

The Aulonocara cichlids were once classified as Haplochromines but were later separated into their own group. Both Aulonocara and Haplochromines are generally peaceful fish that mostly live in open water. This was a great contrast to the Mbuna Cichlids who are aggressive, territorial, and they live in the rocky cliffs of the lake. After all the word “Mbuna” means “rock fish” in the language spoken around Lake Malawi. Any Lake Malawi Cichlid that was not Mbuna was automatically classified as Haplochromine until it was discovered the Aulonocara cichlids were a separate genus.

Peacock Cichlids reach lengths between 4 - 6 inches (~ 10 - 15 cm). They come in a wide variety of colours and colour combinations usually consisting of blue, orange, red, yellow, grey, black and white. Peacocks have and elongated body shape with vertical stripes. Many times, their cheeks and faces are a different colour from the rest of their body.

Peacock Cichlids come from the fresh waters of Lake Malawi in the East African Rift Valley. These cichlids stick mostly to the open water and sandy bottom of this lake but some species are also known to run in and out of the edges of the rocky cliffs.

Aulonocara prefer their water to be hard and alkaline because those are the natural conditions of Lake Malawi. Their preference in pH ranges between 7.5 and 9.0, with a temperature ranging from 75 - 81°F (~ 24 - 27°C).

Peacock Cichlids will thrive in aquariums that are 50 gallons (~ 190 litres, 42 Imperial gallons) or larger. They are open water dwellers that prefer to have a rocky set up with plenty of caves toward the back and sides of the aquarium. A little bit of hardy, robust vegetation would be a great addition to the aquarium since cichlids tend to be a little rough on plants. Peacock Cichlids prefer a little bit of a sandy bottom to reflect their natural habitat. These fish will live well with each other as well as other peaceful cichlids and bottom dwellers but they are not to be trusted with fish that are small enough to fit in their mouths. They might be aggressive toward other fish when establishing territories but will otherwise accept one another.

Aulonocara are omnivorous fish and can be fed a variety of prepared flake or pellet foods. Live or frozen foods should also be incorporated into their diet for extra protein. Bloodworms, snails and brine shrimp are a great addition to their diet a couple of times a week.

Aulonocara are ovophile mouth brooders which mean fertilization, incubation and hatching will all take place in the mouth of the female. To start, the male will dig a pit in the sand or substrate. The female will lay her eggs in the pit and take them into her mouth. The male Peacock Cichlid has “egg spots” on his anal fin which the female thinks are eggs she has not yet picked up. She will pick at the “egg spots” on the male’s anal fin with her mouth and this will trigger a release of sperm. The female will take the sperm into her mouth where the eggs are waiting to be fertilized. The female will carry roughly 50 eggs in her modified throat pouch for 21 days. During this period the female will not eat which will cause her to become weak, so it is a good idea to separate her from the rest of the fish. Once the eggs hatch and the fry become free swimming, they will remain close to the mother’s mouth where they will be able to seek refuge at any sign of danger. Peacock Cichlids are great parents and will raise their fry until they are old enough to fend for themselves.

Once the fry have absorbed their yolk sacs and the mother has let them out of her mouth they are ready to eat fry foods. The fry will be able to eat foods such as newly hatched brine shrimp and First Bites which is a highly nutritional food in powder form. The mother will let her brood hide in her mouth if she suspects there is danger present. 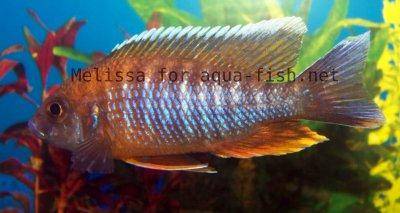 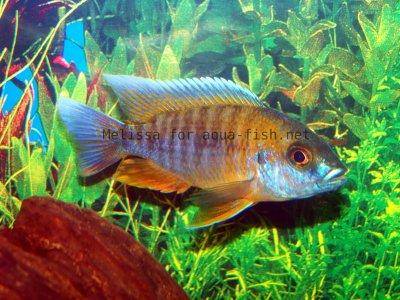 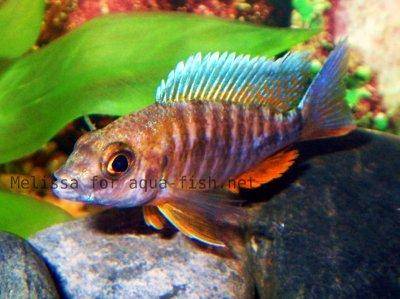 The following answer was moved here on March 25th 2011 due to merging aqua-fish.net/answers with related articles. You're welcome to submit your own questions as long as they're unique and not yet answered on this page, use a form at the bottom of this page for this purpose, please.