This page offers information about air stones for aquariums, lists FAQ and answers them, and contains forum with questions asked by visitors of aqua-fish.net. However we also list websites that sell air stones online! In order to be forwarded to the list of online suppliers simply click this link. Additionally you’re welcome to visit the following pages of aqua-fish.net since they're closely related to the purpose and usage of air stones: Aquarium air pump article with FAQ and The purpose of an aquarium filter with questions, answers, FAQ, pictures and forum.

How to use an air stone, purpose of this device and how do air stones work

Air stones can be placed anywhere in a fish tank, there are almost no limitations as to position and numbers of used devices. The device is connected to the air pump via airline which makes it possible to pump air from outside through the pump to the air stone. There’s a motor which drives propeller that sucks air which is then pumped to an air stone. As an aquarium air stone is a lightweight device which is full of little holes intended for displacing air into the water, air is being released into an aquarium once the pump is plugged into electricity and turned on.

The bubbles won’t react with water, thus air stones aren’t actually aerating your fish tank. The process of aeration is secured by waves that are created as air escapes from the stone. Therefore air stones aren’t necessarily required to run an aquarium, however they’re great addition not only in terms of aeration, but also as a decoration.

Air stones don’t have to produce bubbles 24/7 because they are usually capable of producing enough bubbles/waves to increase levels of oxygen to a reasonable amount even if they're turned on only 10-12 hours a day. Additionally many air pumps are too loud and they have to be monitored on a regular basis because many of them use to “dance” on a surface. A good indicator of low oxygen level is to watch your fish whether they stay close to the surface and try to breathe atmospheric air – if this doesn’t occur, level of oxygen in your fish tank is satisfactory.

Bear in mind that ideal position for an air stone is at the bottom of a fish tank, close to substrate (never bury this device into the substrate!!!). All air pumps have to be placed outside of an aquarium, moreover the pump should be placed somewhere above surface level. This measure is crucial to disallow backstroke in case of electricity outage, as water would flow into the pump if air stone was placed even 1 inch (2.54 cm) above pump. 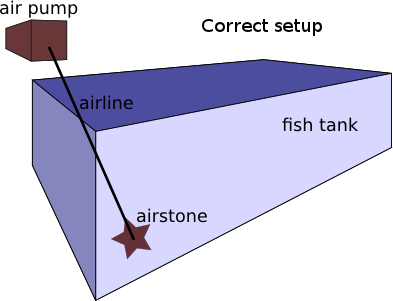 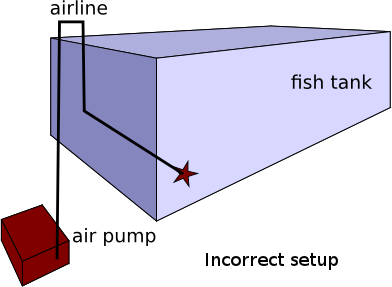 Placement in a fish tank - Aerating through aquarium ornaments?

As mentioned above, ideal position for an air stone is bottom, somewhere in the background or behind plants. This is not valid for breeding tanks where surface has to be affected minimally, thus place your air stone close to the surface as much as possible! It doesn’t matter whether you raise bubble-nest builders, egg layers or livebearers, water in a breeding tank should be relatively still.

Depending on length of the stone you can setup bubble walls or you can even attach the airline to decorations that are designed for aeration purposes – they replace air stones as they're porous and more attractive than simple stones. There are caves, shells, pirates, chests, sunk ships and similar ornaments that can be used for aeration. Bear in mind that you cannot simply put the airline into any cave since it would produce big bubbles which are noisy and often disturb fish – a decoration designed purely for aeration is labeled as “decoration aerator” or similarly.

Most air stones will need pre-soaking before they work effectively, leave them in a container of water for approximately 10 minutes before using them in the tank so that they will produce bubbles straight away.

The most common shape of this device is roll, however you can find it also as a globe or disc, even cube. The roll shape can exist in many sizes and colours. The sizes vary from an about 3 cm (1 inch) and 1 cm in diameter to more than 1,5 meter (almost 5 feet) long. Generally speaking longest air stones are usually flexible and not very robust. Additionally there are pond aerators, these are usually too big and too powerful to be installed in a fish tank.

Why is it necessary to aerate the water?

Fish, just like humans, need to breathe the air in order to survive. Even some fish are capable of breathing atmospheric air (Betta fish, Gouramis, Pleco's with primitive lungs, and so on), most fish require a certain level of oxygen in their fish tanks, otherwise they'll spend most of their time close to the surface where level of oxygen uses to be high. Aeration can be secured through several methods, fish keepers may choose one or more of them to be used altogether:

Bear in mind that it's wise to double secure aeration if you're going on holiday. If a filter becomes clogged up with debris, air stone will still produce enough movement of water to aerate the tank sufficiently.

Moreover many medications that are added to the tank for treating fish with diseases or other problems will reduce the oxygen levels in the water, while medication is being used it is best to run an air stone to keep the oxygen levels at a high enough level for the fish.

2 pictures below show an aquarium air pump connected to stones via hose.

Feel free to visit Air Stones for Aquariums at firsttankguide.net too!

As you can see below the sponsored links, visitors of aqua-fish.net are welcome to submit questions or share own experience. In this manner we've collected questions and answered them at aqua-fish.net/answers, and later we decided to merge all answers with related articles; That's why you can find answers below. Some of the answers may have been answered partially in the article above or in the comments published before March 19th 2011.

If any of the following links doesn't work, use a form at the bottom of this page to tell us, please.