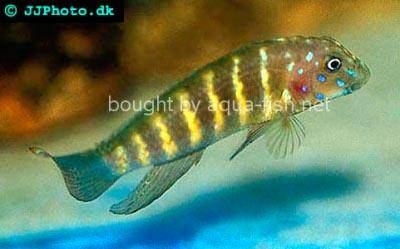 Tanganyika clowns require a high vegetable matter diet. Supply them with spirulina flake and algae wafers. To vary this give them treats of live or frozen foods , try to avoid giving them brine shrimp as feeding these can give the fish digestive problems.

Males will display a brighter colouration and be larger than the females.

Tanganyika clowns are bi-parental brooders. Both parents will take their turns in incubating the eggs and holding the fry. The female will turn quickly to collect the eggs after she has laid them and then the male will fertilise them. The male will normally take over the incubation after two weeks of the female holding them and then she will be ready to breed again.

Eretmodus cyanostictus occupies the higher water levels of Lake Malawi and will wedge itself in the rocks while grazing algae. In the aquarium add plenty of rockwork and use sand for the substrate; it is believed that some grains of sand kept in their stomach aids their digestion.