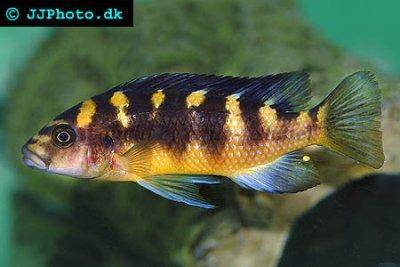 This cichlid resides in caves in Lake Malawi which is located in East Africa in the rift valley.

The bumble bee cichlid is also known as the hornet cichlid. This is a highly aggressive fish with a bad reputation. It is not a good fish for beginners because of its highly volatile temper. Males are extremely aggressive towards other males and it has even been known for the males to attack females in the aquarium with lethal results. For experienced keepers though they are a great addition to the aquarium due to their spectacular markings which earns them their common names, the markings are used as an advertisement to other fish to announce the fact that they are excellent cleaners. In the wild they reside in caves with the bagrus catfish which is a very large catfish. This catfish allow the bumble bee cichlids to live near them and in return these cichlids pick parasites off the skin of the catfish. When the catfish lay their eggs the bumble bee cichlid changes colours for camouflage and they sneak around eating the catfish eggs. When they are done devouring all they can they quickly change back into their usual colouration and go about their business.

To keep the aggression down they will require space in the aquarium, a minimum of at least 75 gallons for a group which should consist of one male with several females. The reason for this is very simple, it shares the attention of the male around the females and gives the females respite in between rather than one female being constantly harassed. They can be kept with other mbuna but try to avoid keeping different species with similar markings.

In the wild the bumble bee cichlid feeds on parasites and catfish eggs. In the aquarium they will accept a wide variety of foods such as flakes, algae wafers, live, dried and frozen foods.

The juveniles have the yellow and black vertical striping that give them the common name “bumble bee”. As they get older the males turn nearly black with a deepening in color when angry or breeding.

The bumble bee cichlid is a mouthbrooding cichlid which is typical of cichlids endemic to Lake Malawi of the East African Rift Valley. The female will hold her brood for approximately 18-21 days before releasing them to care for themselves.

As mentioned above one male should be kept with several females for breeding purposes as well as general keeping, if you are purchasing a group of juveniles then any sub dominant males need to be removed or the dominant male will attack them with lethal results. The amount of eggs laid by the female with each spawn does not run into high figures averaging out at approx 50 per clutch, out of this number 25 to 30 fry is a good success rate. The male darkens intensely during the spawning process which also has the effect of intensifying his egg spots which the female will mistake for eggs. This in turn aids the fertilisation process as she will allow the males sperm into her mouth at this point.