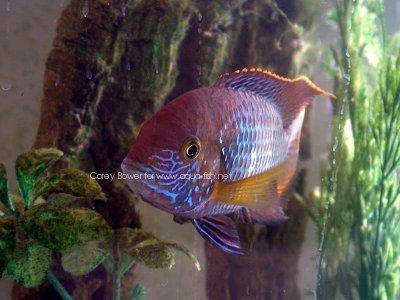 The Green Terror Cichlid is quite often mistaken for the Blue Acara as they are closely related and can display a very similar colouration especially when juveniles. Unfortunately the Green Terror Cichlid has a much higher aggression level and will grow larger than the Blue Acara. The minimum sized aquarium to house these fish has to be at least 55 gallons in water volume, they are a very active species and are also high waste producers like most of the larger cichlids. Make sure that the filtration system used is capable of dealing with these high waste levels so it is wise to get one rated for slightly larger aquariums than the one you have to cope with the waste.

This fish is an avid digger of the substrate, if adding the Green Terror Cichlid to a planted aquarium, the plants will need to be well weighted down or in pots, only add hardy species of aquatic plants that can stand the odd knock or being moved around.

The Green terror is a cichlid and like most fish of the cichlid species, they eat nearly every kind of food. Use live food including bloodworms, small fish, beef, but feed them vegetables as much as possible. Adults should be fed 1 or 2 times a day. The fry requires food about 4-5 times a day. They are not classed as having a specific feeding level in the aquarium such as bottom feeders or top feeders, they will search for their food in all levels of the water column.

Males are much more coloured than females. Moreover, they are bigger than females. As juveniles their colouration may have a bluer tinge compared to the green tinge of the mature specimens, hence the mistaken identity in some cases with the Blue Acara.

Egg-layers. The female will clean the chosen spawning site in readiness for the eggs and once hatched both parents will protect the eggs and the fry once hatched. If stable, water conditions aren't important at all.

They should be transparent. If eggs are white, they haven’t been fertilized or they turned to fungus. The parent fish should attempt to remove any white eggs from the batch.

Do green terrors fight when they breed?

Answer: Male green terrors are very aggressive towards the females when they are in breeding mode but once they have spawned, they both make good parents.

Expected lifespan of Green terror cichlid is about 10 years; Depends on conditions heavily.

Thanks to Corey Bower for pictures of Green terror cichlid! Some pictures were bought by aqua-fish.net from jjphoto.dk. Also thanks to Heather.