This page is devoted to taking care of Electric blue haps; We tried to cover every aspect of raising this fish, however feel free to use a form at the bottom of this page in case you cannot find answer on your question here. Sharing experiences is welcome too!

Electric Blue Hap is the common name for the Sciaenochromis fryeri, Sciaenochromis ahli, Cyrtocara ahli, or the Haplochromis ahli. All of those names are used to represent the same cichlid because of some discrepancies in the naming process. The proper scientific name for this fish is Sciaenochromis ahli, but other names are still used today out of habit and familiarity. This fish is nicknamed “Electric Blue” because of the rich, metallic blue of the males once they reach maturity. This cichlid was mistaken for a Haplochromine because they prefer to swim in areas where the rocks surrounding the shoreline meet the sandy bottoms of the deep.

The Electric Blue Hap is native to the waters of Lake Malawi where the rocky cliffs meet the sandy bottoms. This tropical freshwater cichlid is found in regions off the coasts of Malawi, Mozambique and Tanzania.

Optimal water conditions for the Electric Blue Hap include a pH of 7.5-8.5 and temperatures between 75 and 78°F. Be sure to provide plenty of rocky caves for hiding and a sandy substrate covering the bottom of the aquarium. This rambunctious cichlid needs little to no plants or else they will do their best to dig them all up. If you do decide you would like plants in the aquarium be sure to find very strong, hardy plants. Fake aquarium plants work best because they are very durable.

The Electric Blue Hap is a very aggressive species. This cichlid will attempt to rule the aquarium despite the presence of larger fish. If a larger, more aggressive fish is present the electric blue hap might back down and find a place to hide. If this same fish is surrounded by smaller timid fish, not only will he display his dominance but he will also try to devour any fish small enough to fit in his mouth. It would be best to place other aggressive cichlids of similar size, and also from Lake Malawi in the same aquarium with the Electric Blue Hap.

Electric Blue Haps love nothing more than to devour the fry of one of their fellow fishes. They are never to be trusted with tank mates small enough to fit in their mouths. They will definitely seize the first opportunity to take one as a small snack. They are piscivorous which means fish is their main source of nutrition. In the aquarium an electric blue hap will happily eat any foods you are willing to provide. They will feast on flakes, pellets, veggie matter, live, dried or frozen foods.

If you are looking to breed this cichlid species it is a good idea to keep only one male and 3 to 5 females. If you have only one female for your male to breed with, you are setting her up for disaster, because the male electric blue hap will be very aggressive at the time of breeding so he may or may not cause harm to your one female. Problems generally occur if the female is not ready for spawning when the male is. When you increase the number of females in the aquarium, the male is likely to go from one female to the next until he finds the one who is ready to breed at the same time that he is. It is a very good idea to place rocky caves in the aquarium for the females to retreat to. This will give them a place to hide when the male threatens her with his aggressive behavior.

Electric Blue Haps are mouthbrooding cichlids which means the female will hold her clutch in her mouth until her fry are ready to be released. This process usually takes up to 3 weeks. First the male will start to show interest in breeding by digging a pit for the female to lay her eggs in. She then takes the eggs into her mouth and starts to stimulate the male by touching his “dummy egg spots” with her mouth. This causes the male to release sperm which the female will take into her mouth to fertilize her eggs. The fry will hatch within 24-48 hours and it will take up to 3 more days for them to become free swimming. Once the mother thinks it is safe enough for them to venture out of her mouth she will allow them to explore, all the while keeping them within a safe distance. If the fry feel they are in any danger they dart back into their mother’s mouth where they are safe from predators.

When raising Electric Blue Hap fry in an aquarium setting it is important to keep them in a tank separate from the adults. Once they are completely independent of their mother’s safe haven the fry will need further protection. After being permanently released by their mother, the female and every other fish in the aquarium will begin to look at the young as if they are food. A nursery aquarium should be set up with plenty of hiding places such as dense plants or rocky caves. Feed the babies a high protein diet of microworms and baby brine shrimp. They will accept crushed flakes which contain the rest of the much needed nutrients that are not provided by the live foods. 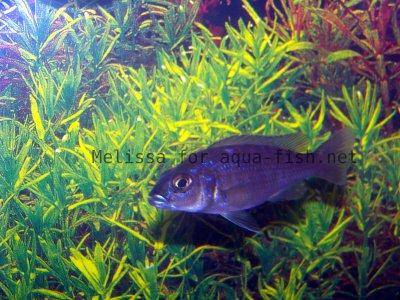 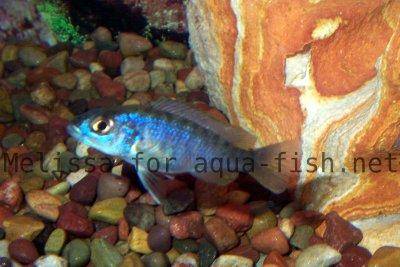