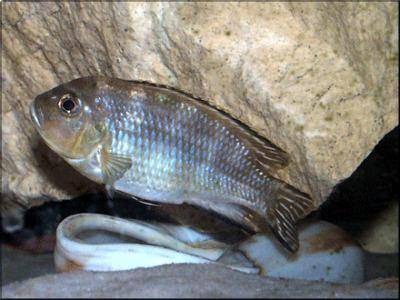 This species is endemic to Lake Malawi on the African continent where it occupies the open waters which have a smooth, sandy substrate rather than the rocky regions.

A much sought after African cichlid that is not always easy to find in the aquarium trade. Unlike some of its close relatives it is a peaceful species and will not both other species however like most fish it can be territorial during spawning times. Adult specimens will only reach an average length of up to 2.75 inches also making it a lot smaller than other Pseudotropheus species. Mature males will display vertical barring which may vary in intensity with each specimen. The body colouration may also vary with each fish but generally they display a brownish colouration on their upper body but the rear may display a pale blue colouration.

If cared for correctly the average lifespan for Pseudotropheus lanisticola is expected to average at least 8-10 years.

Despite their small size the minimum sized aquarium that should be used will need to be at least 30 inches (45 cm) in length and 12 inches (30 cm) wide. Use a suitable filtration system that is rated for the water volume of the aquarium and provide strong lighting to promote algal growth, To recreate their natural habitat add some rockwork to the rear of the aquarium, allowing for plenty of open swimming spaces at the front. Coral sand should be used for the substrate, this will also help to keep the pH of the water alkaline. Large snail shells should be scattered on the substrate making sure there are plenty for each specimen in the aquarium. The water temperature should range between 23 - 26°C (73.4 - 78.8°F) and the pH should range between 7.5-8.8. Plants can be added to the aquarium if you choose, these will not be nibbled. The Malawi shell dweller tends to occupy middle to bottom levels in the water column but will not be aggressive to other species in the tank but they will protect their shells so if adding bottom dwellers only choose peaceful species such as Synodontis.

These fish are classed as omnivorous and they will accept a wide variety of foods. They will graze on algae and will also accept a quality flake or small cichlid pellets. They will also require meaty foods such as small crustaceans, blood worms or brine shrimp. For extra vegetable matter offer blanched peas, zucchini or spirulina flake.

Malawi shell dwellers are maternal mouthbrooders. It is best to add one male to several females and condition the fish prior to breeding with live or frozen foods. Once a bond is formed the female will guard her shell at a higher level and the male will spend a lot of time swimming around it. Once ready to spawn both parent fish will enter the shell and the eggs will be deposited and fertilised. The female will then incubate the eggs and guard the fry when they are first hatched in her mouth. She will only release the fry when she knows they are safe or large enough to fend for themselves. It is important that the female does not get stress during the incubation and just after hatching or she may release the fry too early. The fry caan be fed on newly hatched brine shrimp or infusoria until they are large enough to accept crushed flake or micro worms.