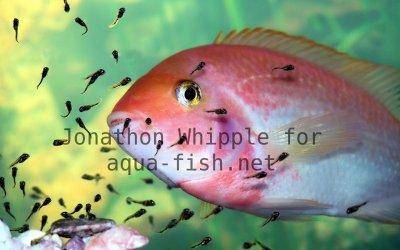 Window cichlids come from South Mexico, you can find them from Rio la Antigua in the north to Rio Papaloapan in the south.

Vieja fenestratus live for about 8 years.

The Window cichlid gets its common name from its prominent markings that give the appearance of windows, in fact the Latin word for window is fenestratus - hence the Latin name given to this fish when classified. They can be found in two main colour morphs commonly called greys or the orange morph, with both of these the colours will intensify during spawning periods. They are not that common in the hobby due to the aggressiveness of these fish during breeding so expect to pay a high price for good specimens. In the aquarium they are suited to tanks that have a low water flow and a sandy substrate as they are diggers, décor can be provided by adding rocks, wood or even upturned terracotta plant pots. As expected they are high waste producers so always use a good filtration system backed up by regular water changes.

Vieja fenestratus needs a lot of space. If you want to have a pair of these fish, you will need a lot of caves, hiding places for the female and a very large tank, otherwise the male will kill the female.

Window cichlid is omnivore and will eat vegetable matter food, insects and small fish. They tend to prefer foods with a higher vegetable content so using a suitable cichlid food for the staple diet is ideal and offering meaty foods should be kept for treats.

The females and males are almost the same, but males are larger and they have a nuchal hump when they are mature.

Window cichlids spawn on the bottom of the tank, mostly on a rock. They mature when they are about a 1 year old. Breeding these fish is not too difficult if given a large tank for the parent fish, avoid adding any other fish or they will be attacked as the male defends the spawning site. The eggs will have a pink colouration if fertilised and healthy, hatching after a few days dependant on the temperature of the water. To ensure higher success rate, the fry can be syphoned into a growing on tank where food can be placed to them at a closer range thus conserving their energy while searching for food. When free swimming the fry should be fed on newly hatched brine shrimp until they are large enough to accept other foods.