These pictures were provided by Mihail of Romania.

This page is dedicated to raising Rainbow sharks, the main focus is forum with questions, answers and experiences! We'd love to hear about your Rainbow shark, so before leaving this page tell us your story - a form for this purpose can be found at the bottom of this page. A short summary of requirements of Rainbow sharks can be found here: Labeo frenatus profile with pictures.

When you visit an aquarium shop it is very likely you find one of these guys. They can be either gray with orange-red fins or white with more red fins. Sometimes you can see them under the name Red tailed sharks, since some shops misidentify their fish. But Red tailed shark is an entirely different fish. It has a black bulkier body with only one – tail - red fin and it will grow smaller, so watch out. Rainbow sharks can be found under their Latin names Epalzeorhynchos frenatum and the white is Epalzeorhynchos munense or under common names like the mentioned Rainbow shark, but also as Red finned shark or Ruby shark and the albino form is mostly called simply Albino rainbow shark or less often the Golden shark. As most of the fish in aquatic trade, they are small and shy when you see them, but don't be fooled. They grow big and territorial even if the clerk tells you otherwise.

These fish originally come from east-south Asia - Thailand, Cambodia and Laos. Nowadays it is not very easy to find them in their natural habitat due to all the environmental changes countries in this region made to their water ways, such as changing the rivers and draining swampland. These changes disturbed breeding habits of Rainbow sharks as well as it's living space since it is believed this species needs to migrate to start the reproduction process. On the other hand there is the aquatic trade, which is also blamed for the decrease in numbers, however the violation of land is the main reason for their low numbers in the wilderness.

Due to the length and activity of the fish, the best size for a tank should be at least 50 x 17 inches (120 x 45 cm), the height is not as important, even if you should have some free swimming space above the ground level. And of course the more fish you'll have there, the more space on the bottom they will need.

Rainbow sharks evolved in rivers with sandy bottoms, which is why aquarium sand is the best substrate for this species, however you can also use fine gravel for this purpose. Gravel with sharp edges could damage barbels so avoid using it. Always keep a hood above the tank, they use to jump out.

It is essential to have plenty of hiding places like caves, tubes and so on for every one of the sharks you'll eventually keep, but also for other bottom feeders who will live in the tank and will use the caves, since the shark will not share one. Divide the tank into as many territories as many territorial fish you have in there with larger rocks, ornaments and driftwood. The driftwood might colour the water, but to these fish the colouration is beneficial.

Plants are also recommended, but the best is to choose the hardy ones like Anubias, Java Fern, Bolbitis, Blue Stricta, Microsorum and Amazon Swords. Avoid the fine leafed ones. If some algae appears, it should be eaten.

Rainbow shark prefers to live in fast moving waters like streams and rivers, which is why you should provide them with an excellent filtration to avoid any organic waste and a strong aeration system. It is wise to add to an external filter an internal one to add extra horizontal movement as well as aeration. The temperature should be somewhere around 72 to 82°F (22 – 28°C), the pH around neutral: 6,5 - 7,5 and they prefer harder water. If you provide them with the right conditions, thew will live up to 6 or even 15 years.

This is a semi-aggressive and very territorial fish. While still young, they tend to be more shy, but as they grow up, they will guard their territory fiercely. This is why you should create as many hiding places and territories as you can. Rainbow shark will find its place, guard it even from fish swimming in higher water levels and if there is enough space around the territory, so other fish can avoid crossing it, you should have relative peace in the tank. You also should know that every fish is an individual and might react to same tank mates differently.

You should keep only other semi-aggressive fish in one tank with this shark, so when the mood for fight strikes, they will be able to hold their own against its aggressive strikes. It is recommended to never keep only two semi-aggressive fish, because the stronger will chase the weaker. But if you have more fight-ready fish, the stronger will fight with each fish and will not focus on only one target. Some say that fish from Chromobotia, Botia, Syncrossus and Yasuhikotakia genera will not irritate the Rainbow shark and on the other hand Crossocheilus, Garra and Gyrinocheilus will never be left in peace. Also avoid catfish and cichlids living near the bottom or any smaller fish. Suitable are also gouramies, barbs and danios.

You can try to keep more than one shark in one tank, but only if you have the space properly separated into territories and the territories are quite large, maybe even a meter (39.37 inch). Otherwise they might fight and fight hard with members of its own species. Sometimes it is even recommended to keep more than one same sized Rainbow sharks, since they will pick fights with each other and leave other fish alone- Sometimes having two sharks will cause you to separate them into different tanks and occasionally they will be so peaceful, you will not understand how can anybody say these fish are aggressive. It all depends on the conditions you provide for the fish and the personality of the fish. The albino form should be more peaceful than the gray one.

It is an egg-layer, but as it has been mentioned already, these fish do like to fight its own species unless you have a big enough tank to keep two Rainbow sharks, which most people don't. This is one of the reason why there are so few recorded breedings in home aquariums. Another thing is to tell a female from male. The only sign is a slightly fuller body of the female, males might have a bit brighter colouration, but the brightness might be affected by other things than sex too and they should have some black lines on the anal fin. And lastly they probably need something that simulates the migration or hormones.

So since they are so rare in wilderness and they don't breed in tanks, where do the shops get them? They mostly come from large farms in South-east Asia where they are reproduced with the help of hormone Gonadotropin.

They will eat algae, but they are not the most efficient algae eaters. Otherwise they are omnivores, so they will need a wide variety of foods and will eat mostly anything you give them if it sinks to the bottom like flakes, pellets, algae wafers and basically any fish food. You can achieve the brightest colouring and healthy look by giving them live or frozen small crustaceans and larvae as brine shrimps, bloodworms, Daphnias or Artemias few times a week. Rainbow sharks should also eat vegetables and fruit as peas, letuce, cucumber and spinach. 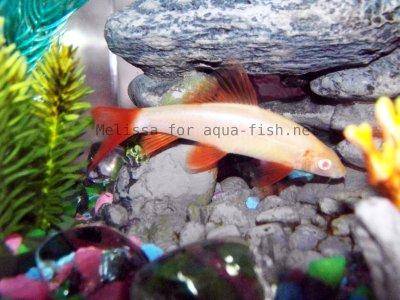