Algae eaters and Types of algae in aquariums

This article describes the reasons why algae grows in fish tanks and it links to fish that eat algae: simply click here. We also answer questions and offer FAQ below. Additionally we'd love to hear about your algae eaters or problems with algae, so when you've finished reading the article leave a comment via the form at the bottom of this page, please! We'd also want you to visit the following pages since they're related to algae problems: Black brush algae, Staghorn algae, Blue-green algae, Chinese algae eater with large forum, Siamese algae eater profile, Controlling algae in fish ponds.

If you notice small or large green spots, or even some hair algae in your freshwater tropical aquarium, you usually try to remove them manually. After careful removal or cutting sick plants for weeks you’ll find that it’s almost impossible to displace all the algae which grow, grow and grow all the time. An ordinary aquarist may consider introducing algae eaters into the tank at this point. Fish shops like this kind of customer since it’s easy to persuade a hopeless fishkeeper that some fish will fix the problem in a short time. Moreover, a skilful merchant recommends more than 1 or 2 fish in order to remove algae from your fish tank as soon as possible. This way people buy from 5 to 10 fish no matter that they don’t know anything about their demands, habits, etc. In order to avoid weedy aquariums you need to understand what algae is, what helps its growth and what to do if it gets out of control.

What helps to prevent algae from growing

Generally speaking, algae isn’t bad in all cases as it too performs photosynthesis and dissolves harmful bacteria which may be dangerous to fish (ammonia and nitrites) and it'll still be present in every fish tank to some extent, however some fishkeepers may encounter situations when plants are overgrown with algae or when there's too much algae on glass. Along with the above listed measurements it's also recommended to consider adding fish that eat algae into such a tank.

Fish which are considered to be algae eaters

Tools used for removing algae in aquariums can’t replace algae eaters since they completely depend on their shapes, tank dimensions, usage and usability of such tools. Everyone should understand that a brush can’t be used in an overplanted tank, behind rocks, inside caves, etc. Unlike plastic or metal tools, algae eaters can reach any place at any time; It all depends on their appetite and size which is why Ancistrus’ and other species’ newborns are the best solution for eating and removing the algae.

Generally, algae as a whole can be divided into groups depending on their colouration, size, and conditions when they develop.

First of all, algae is a natural part of every tank which probably exists in every aquarium except new ones. In my experience, the most seen and the most common is the ’green dots’ algae which grows on glass, rocks, plants, driftwood and various decorations. This algae can be found in tanks with high levels of light. You will probably not need to buy algae eaters for removing it since green dots usually don’t take over the entire tank and grow sporadically in sizes of about 0.1 mm up to 2 - 3 mm (0.04 - 0.12 inch). In addition, algae eaters don’t eat it. If using a brush or other tools, you will spend a lot of time on it, because it’s very difficult to remove, especially from glass.

This type of algae develops in tanks with a high ammonia level and cutting plants helps it to grow too as it develops on cut leaves. If plants are cut, the hair algae grows well especially on Vallisneria species. One way to fight against hairs in aquarium is to cut it from time to time as well as plants which are sick. You don’t need to remove the whole plant, just the part where the hair grows. Sellers like to sell Ancistrus species as the first solution, however this isn’t recommended since only small specimens (up to 1 cm ~ 0.39 inch in length) eat this algae. Adult fish are too lazy to climb the plants to eat it. Instead, they like granules, vegetables, beef heart much more than the hair algae and will rather wait until you feed them. Common pleco (Hypostomus punctatus) is considered to be an outstanding solution, however as they grow up their feeding habits change.

The brown algae can be found in new aquariums, especially because of lack of water chemistry stability. Subdued lighting supports the growth of this algae, however as time goes by it usually disappears. Common algae eaters tend to eat it, but old and adult fish will rather wait for pellets or wafers, eventually frozen foods. Bear in mind that 4 or 5 algae eaters will not solve this problem in a week.

This kind of algae likes to grow on Java moss. In such a case the plant can become brown instead of being of nice green colours known from pictures. Newbies, or greenhorns may consider the plant to be dead however it is not the case and regular water changes should take place in order to get rid of this issue.

This algae could be potentially harmful, and not only for your fish. Blue-green algae are bacteria which grow in warm, shallow, slow moving or still, freshwater. There are known as cyanobacteria too, but they are more commonly known as pond scum and they need light for life which is why they are photosynthetic bacteria. The first known species were blue-green. Now we know of algae from olive-green to red in color.

Removing the blue-green algae isn’t difficult. You only need to aerate and filter the tank very well. 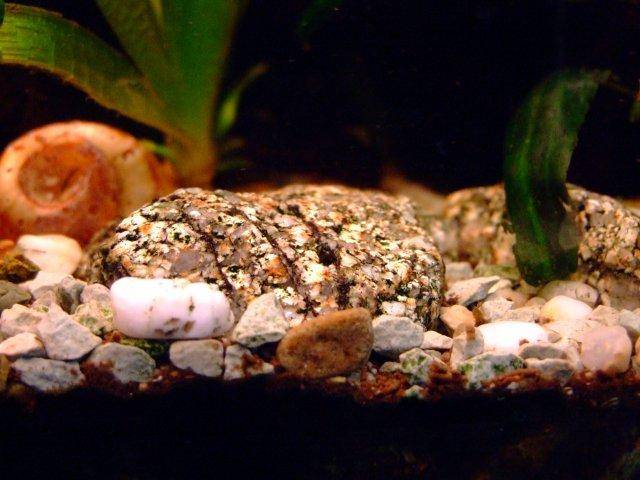 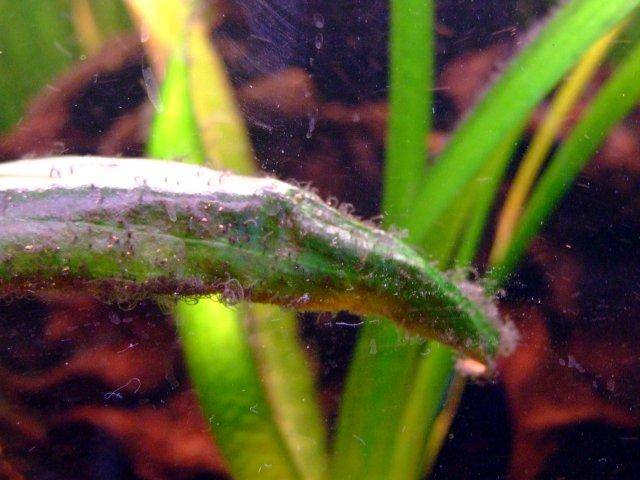 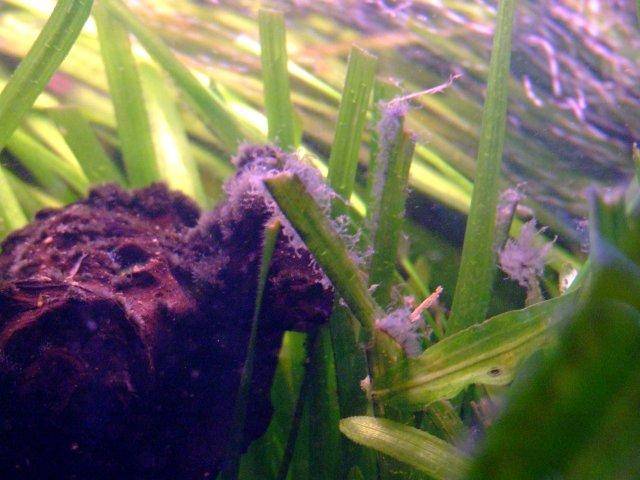 Don’t use chemicals for removing the algae, but use algae eaters instead. Otherwise chemicals could cause serious damage to fish or plants. Chemical use is recommended if only there is no fish in the tank. Wait some time before introducing fish into a tank which was treated by chemicals previously. Besides waiting, use a powerful filter and aerate the tank as much as possible. The delay between treating and introducing fish shouldn’t be less than 1 week.

Due to merging aqua-fish.net/answers with related articles we listed the following question&answer here on March 24th 2011.