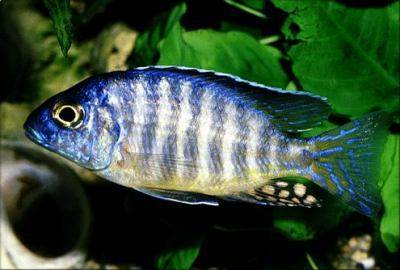 The expected life span for Midnight peacock is 5-8 years.

Aulonocara hueseri earns its nickname by the way the males will strut around the tank displaying their fins. An undemanding fish to keep but regular water changes area must. They will appreciate rocks in the aquarium that are stacked to provide nooks and crannies as they can be aggressive towards each other and also to species that display a similar colouration. Sub-dominant males and females will be harassed by dominant males so hiding places will give them a respite. For this reason it is also advised to keep one male to 3-4 females to prevent all the harassment being aimed at one female. They are not the most aggressive of the Malawi species but care must still be taken to ensure some sort of harmony and balance in the aquarium.

Midnight peacocks will accept quality flakes or pellets; frozen foods should also be included in the diet.

Plenty of rock work should be added to the tank to create hiding places for the females if required. Add 2-3 females for the male; this often induces spawning straight away. A surefire way of obtaining breeding pairs is to purchase a group of juveniles and let them pair naturally, another trick some breeders use with these fish is to add the pairs to the breeding tank and let it stand without cleaning the glass décor or substrate for 3-4 weeks. Once cleaned this can induce spawning. The male will clean a chosen spawning site and if the female is interested she will swim over and they will then swim in circles around each other until spawning commences. When the pair has spawned the female will scoop up the eggs in her mouth and swim to the rear of the male who will then fertilise the eggs by releasing the milt into her mouth. The female will hold the eggs in her mouth for 25-30 days. By this time the eggs will have hatched and fry will be released. The fry can be fed on newly hatched brine shrimp.