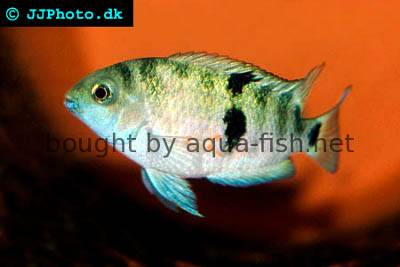 This species should live about 9 years.

If these cichlids do not have enough place, they become territorial. So if you want to have Cryptoheros sp. Honduran Red Point with others, you should get a larger tank with many hiding places, but also with free places for swimming. The best tankmates are other cichlids with same temperament and of same size. They do have another common name of the Blue Convict cichlid but these are the same fish so when purchasing it is best to double check the Latin classification to make sure that you are buying the correct fish. They love planted aquariums but as mentioned above they also require plenty of open swimming space so keep the planting to the sides and rear of the aquarium, they do not like bright lighting so the addition of floating plants will help to diffuse this problem.

Although these fish are territorial they are certainly not the most aggressive compared to many cichlid species, if given space to set up their territories there should not be a major problem with their tank mates. All areas of the water column will be occupied by this fish during the day making them a good addition to the aquarium to provide plenty of movement.

Honduran red point is an omnivorous fish and will eat flake or pellets. You should give them various foods, because it will keep them nicely coloured. Live or frozen foods should be offered a couple of times per week not only to maintain their colouration but also to keep them interested in their food.

Males are bigger and have a hump. They also have light blue colour, but they also may have shades of green. When a male matures, he will have red tail and dorsal fin.

Not difficult. A pair will clean some flat object in the tank, than the female will lay eggs on it. The male guards the area near the eggs and the female guards the eggs. These take slightly longer to mature compared to other similar sized cichlids so patience is required but once a pair is formed and they are ready to spawn, this should become a regular event. The first couple of batches may be unsuccessful until they learn how to become good parents.

The eggs should hatch a couple of days after being fertilised and once free swimming the fry can be fed on newly hatched brine shrimp until they are large enough to accept similar food to their parents.