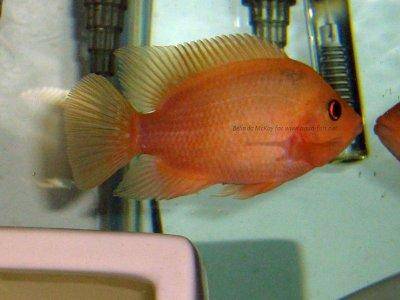 Red devil cichlids are one of the larger cichlid species that are kept by fish keepers but they do not get their common name for no reason, they can be highly aggressive and definitely not for novice fish keepers. They are a very active species so always need plenty of swimming space in the aquarium, smaller tanks are not ideal for these fish.

They originate from Central America, namely the lakes of Nicaragua and they have been given the scientific name of Amphilophus labiatus, although there is an ongoing debate that has lasted for several years that they are the same fish as the Midas Cichlid (Amphilophus citrinellus) but the Midas tends to cover a wider range of natural habitat, true they both look very similar but the debate is still going strong with no definite answer as to this day.

The Red devil cichlid grow large, captive specimens have been reported reaching lengths of 15 inches (38.10 cm) and they are a very stocky fish with strong personalities often intimidating their tank mates without actually harming them physically but be warned, they can inflict injuries if they wish to do so. There are actually a few colour variations, they are not all red coloured, some specimens may display white or yellow colours and some have black edges to their fins, some specimens in captivity may develop thicker lips but in the wild the enlarged lips never seems to occur, the reason for this has never been fully explained.

Caring for the Red Devil Cichlid

As mentioned above these fish need larger aquariums, tanks of 50 gallons (227.30 litres, 60.05 US gallons) is the recommended minimum water volume, the general rule is the larger the aquarium, the less the aggression that is displayed. If keeping more than one specimen then you really need to house them in at least an aquarium that will hold 125 gallons (568.26 litres, 150.12 US gallons) of water, anything less then they will attack their tank mates, each fish needs the space to create its own territory. The substrate should be sandy ans décor is optional but can help with the territorial issues if strategically placed. Make sure that any décor is secure and will not topple over, rocks or wood to create hiding places work well but place them so that there is plenty of open swimming spaces at the front of the aquarium. Like most of the larger cichlids they are high waste producers so use a filtration system that is rated higher than the water volume of the aquarium and perform regular water changes, at least 10% weekly.

There should be a medium water flow and make sure that the heaters are covered with a suitable guard to prevent any risk of injury from burns if your Red Devil decides to move the heater at all.

They do like fairly soft water, adding bog wood to the aquarium can help with this but the temperature range is not that high, they are quite happy with a range of 24 - 26°C (75 - 79°F) and the preferred pH should be between 6.5-7.0.

If you do wish to keep your Red Devil with other fish it cannot be stressed enough to use a large aquarium with décor to break up the territories and only keep these with similar sized cichlids who can hold their own or even with some of the larger catfish species.

Feeding the Red Devil is quite easy, they have a voracious appetite and like most of the larger cichlids will start to recognise the hand that is feeding them in time. They do require a varied diet to keep them interested in food, use quality flakes or cichlid pellets and vary these meals with live or frozen foods such as blood worms, brine shrimp or even chopped earthworms. Surprisingly that are not true carnivores contrary to many keeper’s beliefs, they do require vegetable matter in the diet so blanched peas, lettuce or even odd meals of spirulina flake will cover this area.Like all large cichlids diseases can be contracted so always keep the water quality high so that they develop a strong immune system, low quality can also led to the onset of Hole-in-the-head disease (HITH disease), this is caused primarily by poor water conditions and the fish become stressed, good tank maintenance should prevent this disease from occurring.

It is crucial that these fish are bred in a separate tank, during spawning they will reach their peak of aggressiveness, any other fish around will suffer due to this. The Red Devil is not a difficult species to breed as long as they are given the correct conditions. Sexing the fish is not too difficult especially near spawning times when the papilla are being displayed. Mature males tend to be larger than the females and on inspection of the breeding tubes, the males will possess a pointed papilla while the female’s will be more rounded.They are open spawners but do prefer to lay the eggs on an inclined surface such as a length of slate at an angle to the aquarium or even bog wood and rocks, if a cave is present they may even use the ceiling of this for the spawning site. Getting a pair for breeding can also be a bit precarious as the male does tend to be aggressive towards the female until a bond has been formed, to prevent the female getting injured just add hiding places in the tank so that she can escape for a while until the male calms down.

Once bonded they will dig pits in the substrate just prior to the spawning, just because a pit has been dug this does not always mean the eggs will be laid there, often other sites are chosen as mentioned above. Around 700 eggs on average will be laid and these will be quickly fertilised by the male, once this has occurred the parent fish will both assume parental duties. Caring for the eggs and removing any white eggs that may have contracted fungus or just missed out on the fertilisation.

Keep your hands out of the tank while they are guarding their eggs as the male will defend the nest with great vigour and keepers hand will get the same treatment as intruders.

The eggs should hatch between 3-5 days later but do not attempt to feed the fry at this stage, they will consume their yolk sacs when they first hatch and it is only when they become free swimming a few days later that food should be offered to the fry. The parent fish will move the fry around the tank, digging pits as they do so, it is quite common for the fry to appear to have been eaten but emerge from a different pit after worrying the prospective breeder.

Once free swimming the fry can be fed on newly hatched brine shrimp or even a commercial egg layer food until they are large enough to accept larger live foods. Keeping the Red Devil Cichlids is not as difficult as many keepers would lead you to believe as long as you follow the rules for reducing aggression and keeping the aquarium in pristine condition!

The following question along with answer were added here on March 25th 2011 due to merging aqua-fish.net/answers with related pages.

Thanks to Kevin, Tom and Belinda who have allowed us to use their pictures. Also thanks to Jeremie, LittleMalynda, John Ellis, Stan and Tamri Shavi.