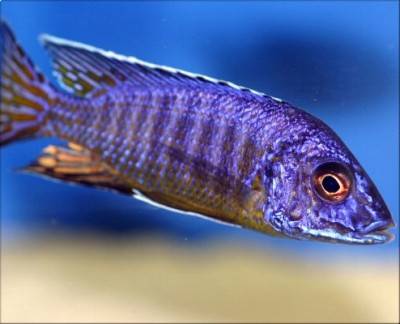 These fish are endemic to Lake Malawi where they inhabit the open waters with sandy substrates.

Aulonocara maulana belong to 23 species of fish that are commonly known as Peacock cichlids. The most common name used for this species is the Maulana bicolour peacock although they are sometimes referred to as bi-colour 500. They tend to inhabit the open waters of Lake Malawi in small groups but will sometimes use the rocky areas for hideaways when they feel threatened. Compared to other peacock cichlids they are on the smaller size, adult specimens tend to reach an average length of up to just under 4 inches (10cm) and display a bluish colouration at the front of their bodies with a yellow band that runs to the rear of the body. Compared to some species of cichlids that inhabit Lake Malawi they are classed as being one of the more peaceful species and make a good species for novice keepers to care for.

They are very undemanding fish and caring of them is quite easy but like all fish they do require high water quality. There may be slight colour variations between specimens but they are instantly recognisable and are very popular in the aquarium trade.

If cared for correctly the average lifespan for these fish is between 10-15 years.

Aulonocara maulana are not difficult to care for if you follow basic rules to keep their health at it’s best so make a good species for novice fish keepers to Malawi aquariums. A small group will do better than a couple of specimens so the minimum recommended size aquarium should be capable of holding at least 100 gallons. It is best to use sand for the substrate and place some rocks at the rear of the aquarium to create hiding places and replicate their natural surroundings.

Like most cichlids they are high waste producers so regular water changes should be performed, at least 10% weekly.

It is best to keep these with other members of the peacock family and definitely avoid keeping them with Mbuna species which can be highly aggressive to other tank mates.

One male should be housed with several females so that a harem can be created and this will prevent one female being over harassed especially at spawning times.

Not a difficult species to feed, for the staple diet offer quality cichlid pellets or a quality flake but this must be varied with plenty of meaty foods such as daphnia, blood worms or brine shrimp. To avoid Malawi bloat which can be caused by overfeeding it is best to refrain from adding food to the aquarium one day per week.

These are not too difficult a species to breed providing they are given the correct conditions. It is best to use a separate breeding tank to prevent any distractions and aggression in the main aquarium. Use an air driven sponge filter to control the water flow and for ease of maintenance and add a few rocks to provide cover for the females. They are maternal mouthbrooders, the female will incubate the eggs in her mouth and hold the fry until they are large enough to be released.

Keep two females to every male and condition the parent fish on meaty foods for a couple of weeks prior to spawning.

When spawning commences the female will deposit her eggs and then scoop them up into her mouth. She will then approach the analfin of the male and nudge him so that he can release the milt which she will also take into her mouth for fertilisation.

Incubation and allowing the fry to grow may take up to 3 weeks, during this time the female will not feed and she may hide away a lot. Any stress may cause her to spit out the fry early thus putting them at risk.

Once they are large enough to feed the fry will be released and after this the female should be rested for 3-4 weeks to allow her to rebuild her strength before using her for the next spawning project.