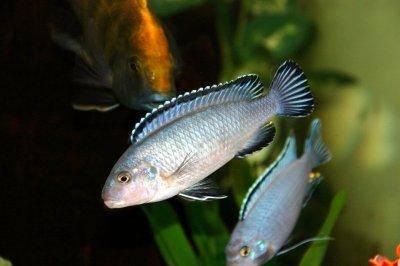 This species of cichlid is from Lake Malawi in the East African Rift Valley, on the coast of Mozambique.

The Powder Blue Cichlid’s lifespan is between 5 and 8 years.

The Powder Blue Cichlid has always been a popular species to many fish keepers especially keepers that are new to caring for Malawi species, they tend to be tolerant of other tank mates as long as they have a different colouration, however they can be aggressive to their own kind especially the males to other males so be aware of this. As expected when setting up the tank it is best to add plenty of rock as this will provide the fish with plenty of hiding places in the gaps, especially useful for badgered females who are being pursued by the males and even help out males that are not dominant in the colony.

You may find many colour variations, some specimens may lack the black stripes on their dorsal fin and some will vary with the intensity of the blue colouration. What is noticeable with the Powder Blue Cichlid is that the females display the same colouration as the males but usually with slightly duller tones.

The Powder Blue Cichlid is an omnivorous fish. Their diet should consist of mostly veggies and some live foods. The will accept a variety of store bought foods as well.

There are very subtle differences between the males and females of this species. Males will have a brighter blue color than females, almost as if they were shiny whitish-blue. Females have a pale, dull blue colouration. Males should have dummy egg spots which come in handy in the breeding process.

Breeding can be tricky but for the best results only keep one male in the breeding tank and always outnumber him with plenty of females, at least 4 females per male. This will prevent any one female being hounded and becoming stressed by the male in his commitment to produce fry. This mouthbrooding cichlid may produce up to 60 fry in one brood. The female will hold the eggs/fry in her mouth for up to 3 weeks. Make sure that the holding female does not get stressed or she will “spit” her fry and then they run the risk of being eaten, keep the lighting dimmed and when she feels that the fry are safe she will release them. She may do this several times initially but at the slightest threat the fry will return to the safety of their mother’s mouth.

Thanks to Eric and Marwin for pictures.