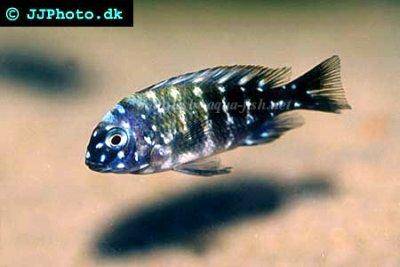 The Dwarf Tanganyikan cichlid is endemic to Lake Tanganyika where it occupies the deeper water.

Compared to other species of cichlids that occupy Lake Tanganyika, these are not the most aggressive but they will squabble with other specimens of their own kind. They do not mature to a great adult size, average length for adults being just under 5 inches but they do look impressive as a group in the aquarium. As juveniles there body colouration is black which is broken by spots or either white or a yellow colouration, as they mature there colouration changes to a dark blue base which is broken by a yellow or white bar which runs vertically down the main body. Due to their more peaceful disposition they do make a good species for novice keepers new to keeping African cichlids. You may also hear of these fish referred to as the White spotted cichlid due to their juvenile colouration.

If cared for correctly the Dwarf Tanganyikan cichlid should have an average lifespan of between 5-8 years but there are cases of these fish living even longer.

The minimum sized aquarium that should be used for housing the Dwarf Tanganyikan cichlid should be at least 4 feet in length and one foot wide ( 120 cm x 30 cm).This is fine for a small group but larger groups will require larger aquariums. Sand should be used for the substrate and the decor is a matter of choice but to keep in line with the lake adding some rocks in the background to provide hiding places works well.

The temperature range should be set between 24-26°C (76-79°F) and the pH should range between 8.5-8.9. These fish will require a fully cycled aquarium with stable water parameters and they also demand high water quality so regular water changes are a must as is using a filtration that can cope with high waste producers such as these.

High oxygen levels in the water column are required so aim the outlet nozzle from the filters towards the water surface to increase gaseous exchange.

All foods offered should be accepted by the Dwarf Tanganyikan cichlid but they will require extra vegetable matter in their diet. Use cichlid pellets or a quality flake for the staple diet but this should be varied with treats of live or frozen foods such as brine shrimp or bloodworms. For extra vegetable matter include blanched peas, spirulina flake or chopped cucumber.

Not an easy species of fish to sex, it is probably best to purchase a small group and allow them to pair naturally.

The Dwarf Tanganyikan cichlid are a maternal mouthbrooder, they are quite easy to breed once you have obtained some pairs. It is best to purchase as a small group and allow them to pair as they mature. It is best to keep a harem of females with one male in the breeding tank as two males will be extremely aggressive towards each other. When spawning the eggs are deposited over rocky areas and once the fertilised the female will scoop them into her mouth for incubation. It can take up to 30 days for the fry to be released so during this time it is very important to keep the female stress free, premature release of the fry will incur losses.

Once released the fry can be fed on newly hatched brine shrimp or infusoria until they are large enough to handle the same foods as the parent fish.