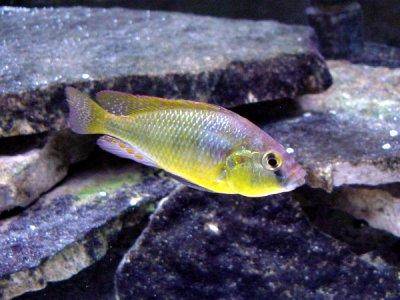 Burton’s mouthbrooder are found on the African continent where they are endemic to Lake Tanganyika.

Like most of the Haplochromis species, these fish prefer to live in large groups where a harem style existence takes place with the dominant males being the most brightly coloured and also the most aggressive when defending their territory. Adult specimens can be expected to reach an average length of up to 6 inches but they do require a lot of space in the aquarium so smaller tanks are not suitable.

Due to their aggression they are not ideal for novice fish keepers but with some experience they can be housed safely and make a good addition for cichlid keepers.

If cared for correctly the average lifespan for Burton’s mouthbrooder is expected to be between 5-8 years.

As mentioned above these fish need a lot of space. Despite them not being the largest cichlid the minimum sized aquarium that should be used will need to be at least 4 feet (120cm) in length and 1 foot - 18 inches wide (30-45cm). Rock formations should be added to the rear of the aquarium with plenty of gaps to allow the fish to swim through. Sand should be used for the substrate and plants can be added if required which should not be nibbled on by these fish. All cichlids are high waste producers so use a filtration system that is rated for the water volume of the aquarium and back this up with regular water changes of at least 10% weekly. Always allow for open swimming spaces at the front of the aquarium as Burton’s mouthbrooder are very active and will need lots of space. It is always best to keep one male with several females, dominant males will fight to the death if they do not have the space to create their own territories.

Burton’s mouthbrooders will accept cichlid pellets or a quality flake for the staple diet but they will require meaty foods to vary their diet and strengthen their immune system. In the wild they feed on crustaceans so chopped cockles or mussels are ideal. Chopped earthworms can also be offered as well as brine shrimp or blood worms.

Mature males display a much brighter colouration when compared to mature females.

As the name suggests they are a mouth brooding species. Dominant males will dig a pit in the substrate and entice the females over by displaying to them with quivering motions and flaring their gills. At this time any other male would be chased off with extreme aggression. One a female is receptive she will swim to the pit and deposit her eggs, an average batch would be 15-20 eggs with each spawning. The female will then attempt to pick up the eggs and at the same time be fooled by the egg spots on the anal fin of the male allowing him to fertilise the eggs in the female’s mouth. During incubation the female will hide away on the rockwork and not feed, during this period she should not be stressed or she will release the eggs early. Over a three week period the eggs will hatch and the female will contain the fry in her mouth until they are large enough to care for themselves. At any sign of danger the female will scoop the fry back into her mouth until the danger has passed.

Once free swimming the fry can be fed on newly hatched brine shrimp or infusoria until they are large enough to accept the same diet as the parent fish.