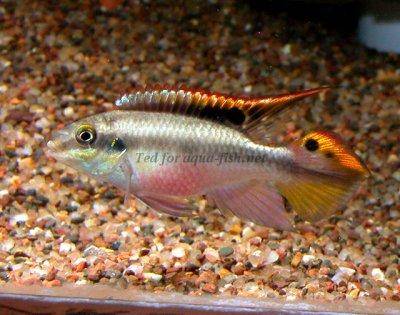 Kribensis otherwise known as kribs are dwarf cichlids that originate in the rivers of West Central Africa. They are characterised by a purple abdomen that is more pronounced in the female. Males are generally less colourful, but slimmer and larger than the female often having longer dorsal and anal fins. They are generally peaceful, but tend toward becoming territorial when they are spawning. They may be kept as a pair or several individuals. They are rather territorial among their own kind. Kribs should be fed a good quality pellet food that sinks to the level at which this fish swims, as well as live foods and frozen bloodworms and brine shrimp. This is one of the easiest fish to breed and it is not uncommon to find a pair spawning in the tank if provided with a suitable setting. An empty coconut shell or a ceramic flower pot should be provided to encourage spawning. Kribs are devoted parents that protect their young fiercely while taking them on tours around the aquarium.