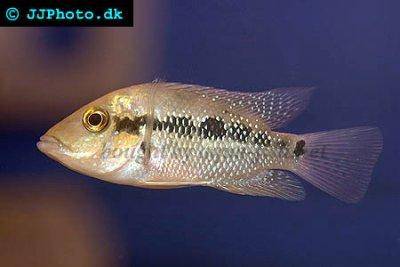 The False firemouth cichlid can be found in Central America, namely Mexico where it inhabits the local rivers and streams.

The False firemouth cichlid can be found under a number of different common names such as the Turquoise cichlid and Robertson’s cichlid. They are quite peaceful compared to some of the other similar sized cichlids but they can become very territorial at spawning times. Their Latin name is Amphilophus robertsoni and they belong to the order of perciformes.

Adult specimens can reach a size of up to 9 inches so they do require a larger aquarium to keep them successfully so bear this in mind if you are considering housing them. The main body colouration that they display contains blue, yellow and purple pigments, as they mature they develop dark vertical bars.

The False firemouth cichlid is not readily available in most aquatic stores so expect to pay higher prices for this fish, it is surprising that they are not more popular with their vivid markings but this could be due to the difficulty experienced in breeding these in captivity.

They are classed as eartheaters due to their habit of feeding from the bottom of the aquarium, sifting through the substrate for morsels.

If cared for correctly the average lifespan for the False firemouth cichlid is approximately 9 years.

These fish can be housed with other cichlids of a similar peaceful nature but ensure that all of the fish have plenty of swimming space. The minimum size of aquarium should be at least 30 gallons for a small number of specimens but if keeping more fish then increase the aquarium size accordingly. They prefer to inhabit the middle to lower levels especially at feeding time so keeping them with species that prefer the higher levels will give them more space. The water temperature should range between 23-27°C (73-81°F) and the pH should range between 7.2-8.0. As expected these cichlids are high waste producers so ensure that the filtration system is rated for the water volume and back this up with regular water changes of at least 10% weekly.

Sand should be used for the substrate and add rocks or wood to provide hiding places, this will make the fish feel more secure.

Plants can be added to the aquarium but the False firemouth cichlid may uproot some of these while they are searching for food in the substrate.

The False firemouth cichlid is classed as an omnivorous species so should accept all foods offered. Use a commercial flake or pellet for the staple diet but this should be varied with meals consisting of meaty foods such as brine shrimp, chopped earthworms or bloodworms. Extra vegetable matter can be supplied by offering blanched peas, spirulina flake or nori.

Mature males tend to grow larger compared to mature females and they will display a brighter colouration.

The False firemouth cichlid is a difficult species to breed in the aquarium however it has been achieved on a few occasions. They are a substrate spawner and both parents will show parental care to the brood. The main problems with a breeding project involves acquiring a breeding pair as aggression will be shown by more than one male housed in the same aquarium. If you are lucky enough to obtain a breeding pair then a separate breeding tank is advised to control any form of aggression. The eggs will be deposited in the substrate and after 48 hours they should hatch but the fry will not require feeding until they are free swimming as they will consume their yolk sacs initially. At this stage they can be fed on newly hatched brine shrimp.