This page is an introduction to raising the Corydoras species and points to the most popular cory's too. Of course we'd love to hear about your Corydoras at the bottom of this page and you're welcome to visit the following page: search page within our database which also offers links to cory's in our database - each described in terms of care in home fish tanks.

Corydoras, small fish known as Cory catfish, Cory cats or simply Cories, come from South America and can be found in freshwater environments. Their name Corydoras is derived from the Greek language, and it consists of “kory” (means helmet) and “doras” which means skin. There are more than a few varieties of these fish, they can be differentiated by colours and sizes, most Cory’s reach between 4 and 6 cm (1.57 to 2.36 inch). This article summarizes what they have in common, but we also link to particular species at the bottom of this article.

Recommended tank setup for Corydoras – Along with ideal parameters

Corydoras will love sand bottom, this type of substrate should be a preferred choice as this species has sensitive barbells. Fine gravel with diameter of 3 mm (0.1 inch) is acceptable too. Substrate should be dark because these fish are sensible to stressful conditions, moreover they’re not predators which means they are used to seek shelter. All in all, dark substrate makes them feel safe.

Occasionally Cory’s get stuck in wrongly setup decorations or even plants with strong roots/rhizomes (for example the Anubias plants), and if not removed quickly their barbells can die off, however barbells usually grow back in 4-8 weeks. It’s important to count your Corydoras on a daily basis because small specimens aren’t able to find the way out if they get caught in roots or wrongly setup rockworks – such fish will slowly die, they won’t be able to move which leads to problems with breathing. 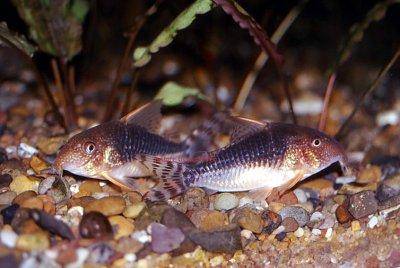 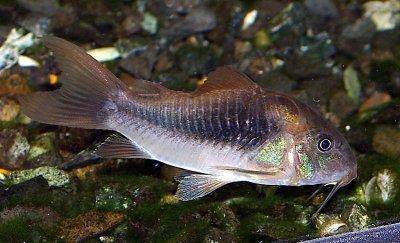 If kept correctly, these fish normally live very long. Once a Corydoras aeneus lived for 27 years in captivity, and 20 years is not too uncommon.

Quality of water is important

Cory’s can’t stand moderate or high levels of ammonia and nitrites. If you’re raising livebearers like Guppies, Mollies or Platies in a small tank without excellent filtration, then Cory’s aren’t fish for you. Quality of water must be monitored on a weekly basis! Bear in mind that best readings of ammonia, nitrates and nitrites are zero.

Cory’s aren’t only sensitive to inappropriate lighting conditions or ammonia, they also need stable water chemistry much more than most of other species. Your tank can offer the right environment for selected Corydoras, however it’s possible that newly brought specimens die in a couple of weeks after being moved to their new home due to huge differences between their previous and new home. The pH value must be changed gradually, the same approach applies to hardness and temperature. pH can be changed by 0.1 each week, hardness can be changed by 1°N dGH (17.86 ppm, 0.36 mEq) per week and temperature can be changed by several degrees per day. Impact of wrong temperature is minimal since this variable uses to vary on a daily basis – day temperature is greater than night temperature.

If you’re about to transport fish, you should test water in their current tank and then replicate these conditions in your own aquarium (or their new home). Naturally, increasing levels of ammonia or nitrites shouldn’t be done in case there’s ammonia spike in their current tank. All values such as pH, carbonate hardness, general water hardness, temperature should be same or very similar in order to initiate the acclimatization process properly.

The process when fish are being introduced to their new home is similar to the following common practice:

Bear in mind that all Cory’s are very social fish, therefore they must be kept in groups of 6 or more. However the ideal number of these fish is 15-20 per group. 1 Cory will need approximately 25 square centimeters which equals to 3.87 square inch. So a group of 10 Cory’s will need only 250 square centimeters (38.75 square inch) – this is 25x10 cm or 9.84x3.93 inch of surface (of course they’re going to live at the bottom).

Despite what most aquarists think, Corydoras need more than flakes as flakes won’t sink to the bottom very fast, therefore most of flakes get eaten by fish which occupy top or middle levels of a fish tank. Additionally mouth of Cory’s are pointed at bottom which means they collect food from substrate, plants or rocks.

Corydoras are omnivores, ideal diet for this species include: 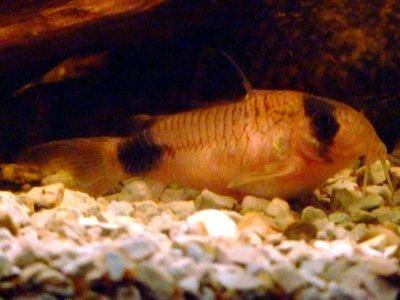 Perfect tank mates include Angelfish, Discus, Ram cichlids and practically any peaceful fish which originate from South America. Even peaceful Asian loaches and other fish can be kept with Cory’s, however it’s necessary to avoid territorial tank mates such as Pictus catfish, aggressive cichlids or Puffers. Such fish often don’t come from rivers of South America, perhaps the worst scenario is when African cichlids which require hard alkaline water are mixed with Corydoras which prefer neutral water and often do well in higher temperatures. Here’s a list of suitable species:

Here’s a list of species that must not be kept with any Corydoras:

If the Corydoras is threatened by a predator it is capable of raising a spine on its dorsal fin which can lodge in the throat of the predator causing the death of the fish, this is why the Corydoras should always be kept with suitable tank mates.

Males are usually smaller and not that rounded as females. Moreover males usually chase females especially during breeding season when it isn’t uncommon to see two or three males chasing one female. Bear in mind this is a way of harassment and it shouldn’t last long, otherwise the female may feel uncomfortable which could lead to premature death. This is the reason why the ratio of males to females should be 1:1 or ideally 1:2.

Breeding is somewhat difficult especially for newbies, however Cory’s are known to lay eggs sporadically even without intension of the keeper. Corydoras won’t lay hundreds of eggs, in fact they often lay between 10-15 eggs in one place – usually glass, but they’re able to lay eggs on leaves of plants, even decorations can be a place which they choose for this purpose. Due to the number of eggs it’s quite difficult to notice their existence, eggs are often eaten by other fish.

The breeding process can be triggered by lowering temperature in the tank to 21°C-22°C (69°F-71°F), by giving your fish live or frozen food such as worms, very small insects, eggs of insects, or larvae. All mentioned foods can be frozen or live – bear in mind that frozen food must be defrost before offered to the fish! Often water changes also stimulate their willingness to breed, sometimes separating the male from female helps, however it’s not the greatest impulse. pH in a breeding tank should be between 7 and 7.2.

If eggs have been laid, it’s best to remove them with a credit card or a razor blade and place them in a separate tank which can be a little tricky because water parameters must be exactly the same like in the original tank. This approach isn’t always practicable, therefore raising Cory’s in a dedicated tank is another of the options. Perhaps the worst case in terms of breeding Corydoras is to raise them in a community tank which offers lowest chances for eggs to hatch.

Newborns should be fed newly hatched Artemia salina or microworms that can be bought at local pet stores. Newborns often eat algae which is good as it increases their survival rate (the fish aren’t that dependant on food given by the keeper).

There are more species of course. When you click here, you'll be forwarded to our database search.