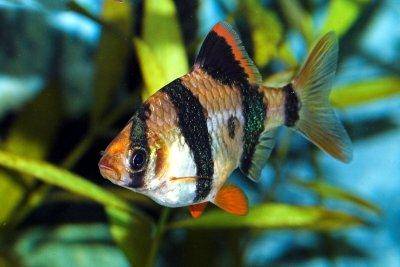 The Tiger Barb originates from South-East Asia, they are to be found naturally in Malaysia, Indonesia and Borneo. Over the years as they are such a popular aquarium fish some keepers have released these fish into the wild and they can now be found in various countries around the world such as Australia, Singapore and even in some South American countries.

The Tiger Barb is a very active species of fish that do require a lot of swimming areas around the aquarium but they will also appreciate the addition of places ot hide when they feel the need. To replicate their natural habitat the aquarium should be planted and hiding places provided by adding rocks or wood for décor. The water should also be slightly acidic but temperature wise, keeping the water at around 26°C (79°F) although they can also tolerate slightly lower temperatures.

Unfortunately the Tiger Barb has the reputation for being highly aggressive and “fin nippers”. This can be true if they are not kept in a large enough group, bickering should then be confined to the group but they will tend to bully any tank mates that are shown signs of being stressed or injured.

Females are rounder because they carry eggs. Males are more coloured than males.

Egg-layers. Tiger barbs prefer neutral or soft water when breeding. Tiger Barbs become active at a very young age, they are capable of breeding when 7-8 weeks of age. They show no parent care though so to increase the survival rate it is best to remove the eggs to another tank to prevent the fish from eating them. There shouldn't be problems with successful breeding.

This fish is also known as Barbus tetrazona. Special thanks to halkor for allowing us to use the pictures.