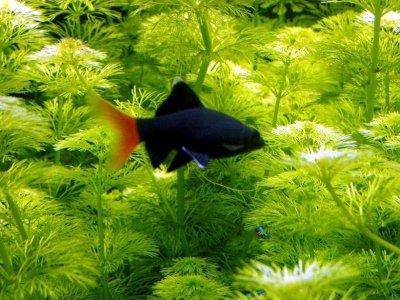 The Redtail Shark is sometimes known as the Red Tail Black Shark and is closely related to the carp and minnow species. They are not actually sharks but they are very popular in the home aquariums. This is mainly due to their intense colouration that they display when cared for properly. They are often housed in community set ups but it should be noted that they can be very aggressive and territorial, keeping more than one specimen of this fish in the same aquarium will inevitably lead to a lot of disputes. The minimum size aquarium for an adult specimen should be at least 3 feet (91 cm) in length and they do prefer a planted set up with plenty of hiding places created by the addition of rocks or wood. They also have a reputation for being jumpers so make sure that the aquarium is fitted with a lid. As their natural habitat is flowing water in streams some form of current in the aquarium will be appreciated by the Red Tailed Shark, this can be replicated by the use of the outlets from the filters or even the addition of small power heads.

Some keepers reported 10 years, however it is usually less.

Redtail shark is an omnivore. Simply try different foods and you’ll see that they like the most. Usually a combination of bloodworms, brine shrimp, granules, tablets are sufficient to keep them healthy. Also try Daphnia, eventually insects (frozen or live). Feeder Guppies are a great addition.

Since females carry eggs, they are bigger than males. Males use to be more coloured than females, however if more males are kept in a tank, the dominant one could harass others which results in different colouring of non-dominant males. Breeding mainly occurs in Asia, attempting to breed these in home aquariums will lead to problems due to their aggressive nature, purely the fact of adding a male and female into the same tank will cause disputes so is not recommended.

On March 24th we moved the following question and answer here from aqua-fish.net/answers due to merging it with related pages.

What fish can I have with my red tail shark?

Answer: Since this is a moderately aggressive fish, it is best to keep the red tail shark with equally sized tank mates that have the same temperament as they do. It is not advised that you keep more than one red tail shark at time because they will exhibit aggression toward one another. Mid to top level swimmers such as gouramis and barbs can be kept with this fish.

Pictures were provided by Alberto Villarroya. Other were bought by aqua-fish.net from jjphoto.dk.