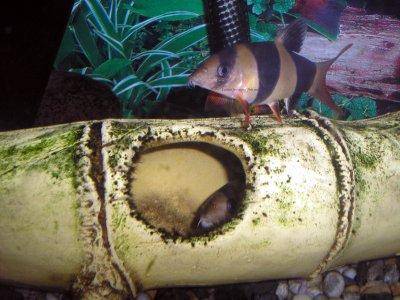 Clown loach is the common name of Botia macracanthus (you can also find Botia macracantha), and is one of the most common fish in aquarium. They are native from Borneo, Sumatra and Indonesia, the most of them are still captured in the origin places, transported and sold around the world; some others are bred in large ponds where their life is almost the same they have in nature.In nature, Clown loach can reach up to 30cm of length, while in aquarium it grows less and reaches about 10 – 12 cm; 20 cm in large tanks. It has long slim yellow body with three black stripes, the first on the eye and the last at the end of the dorsal fin, the tail and barbels near the mouth are reddish, but the colour concentration is different for each fish and change with food varieties and water qualities. Botia can get adapted to every freshwater aquarium, but prefers a temperature near 82,5°F (28°C), a neutral pH and a soft or medium water hardness. In nature, they live in big groups, so when you decide to house them, do not take only one fish, but take a trio or some more, in this case remember they can grow quite big so be careful not to overpopulate your aquarium.Botia are known to eat snails and often are taken for this reason, anyway they do not eat a lot of them and seems to prefer pellet fish food; if you need to kill all the snails in your aquarium a Badis badis fish works better, and there are also various techniques that do not employ fish at all.

Thanks to Erwin van Beek and Louise for pictures. Other were bought from jjphoto.dk. Another is from Jonathon Whipple.

A question&answer below was moved here on March 23th 2011 due to merging aqua-fish.net/answers with related pages.

Why does my clown loach play dead?

Answer: This is often just a playful act bit in their natural habitat they will play dead to deter predators from attacking them. Sometimes they will even float to the surface to make out that they are not alive.