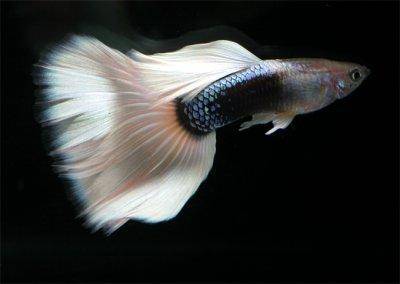 They’ll eat almost anything that fits into their mouths. In addition these fish will try to eat everything you give them until they almost explode, so don’t overfeed them, even if they give you the hungry eyes look. Guppies have small stomachs, so feeding them two times a day with a small amount of food is a good idea, however feeding once a day is OK too. You can offer them small flakes, small granules and they love frozen food like bloodworms, tubifex, artemias and so on. Sufficient amount of food is everything that they can eat within 2 or 3 minutes. If even after this time there is food floating around, you are overfeeding them.

Guppies originally come from rivers of South and Central America. They live there in fresh and even brackish rivers. Nowadays you can find them in other rivers in warm climate like in Florida, and in some Asian rivers where they were deliberately introduced to eat mosquito larvae to decrease the numbers of malaria occurrences.

The male and a female almost look as if they don’t even belong to the same species. Males have tiny bodies and huge colourful fins. Their tail fin is almost as long as the whole body. Females on the other hand have very large and bulky bodies. They can be almost 2 times bigger than a male and they are far less colourful and have short fins.

Guppy fish is a pseudo-livebearer which means that the female doesn’t lay eggs, but her eggs are fertilized and later they hatch inside of her body. It takes about a month from fertilization to “giving birth”. Parents don’t need any special conditions, there just has to be a male and a female in a tank. And since a female can even store sperm inside of her body, sometimes she can breed months after she saw a male. So they breed very easily, and just as that easily they can overpopulate the aquarium. The adult fish will eat their young if they catch them, just as any other fish will see the guppy fry as delicacy. But if you give the fry some hiding place between plants like Java fern or a heavy growth of Vallisneria for example, they will survive and continue on breeding. Also you can move a female into a separate tank (150 litres or 40 US gallons, sponge filtration, slow water movement) to give birth and then put her back into the original tank to ensure the highest rate of survival of the fry. The fry can be fed by crushed flakes, granules or special fry food. After about 3 months, they are fully grown and they start breeding themselves.

Guppies usually live 2 years. In my experience, some specimens can live 3 or more years. On the other hand, such a lifespan is rare; about 5% of Guppies live so long. Mostly they will live only about a year. One of the reason for their short lifespan is that they are often inbred, which causes genetic deformations and vulnerability to diseases.

Most of the guppies are kept by beginners in small tanks, sometimes even bowls without any filtration, but that is wrong. They need at least 40 litres (10.57 US gallons, 8.80 Imperial gallons) per 10 specimens and those small fish bowls are absolutely not suitable for keeping any fish except for some extraordinary situations such as curing ill fish or having a large bowl (60 litres, ~16 US gallons, 13 Imperial gallons). Otherwise these fish don’t have any special requirements. Just keep the water reasonably clean, neutral and warm during a colder season. Tall plants are good additions since they’ll give a sense of protection and since males get into fights or they may harass females, they will also be seen as great hiding places for the fry.

Guppy fish is a very social fish. They should always be kept with other fish, at least 15, never alone. When choosing tank mates, you should consider that they are very active. They swim around all day and they often annoy other fish. Don’t put them together with long fined fish like the betta fish and such slow moving species. Also avoid even slightly aggressive fish like gouramies, paradise fish and so on, otherwise the guppies will be eaten. If you want to keep more guppies, always buy two females per every male. If you’ll keep more males than females, males will harass the female until she is not be able to take it anymore and she dies. Without females, males will also more often parade themselves in front of other males and nip at each others’ fins.

One of the reason for the popularity of guppies is, that they come in uncountable amounts of colour forms. Their fins can have many different patterns, colours and shapes, and by breeding, you can make some new ones too. Some breeders sell only males of their unique guppies, so nobody but them can breed their unique breeds.

Thanks a lot to William Yen who has allowed us to use the pictures.

Following pictures were bought by aqua-fish.net from jjphoto.dk