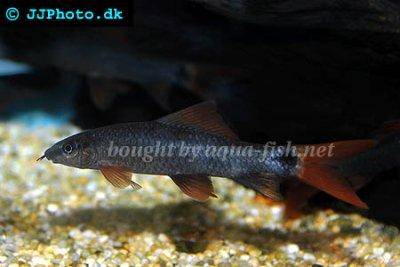 Labeo Frenatus are herbivorous for the most part. They are algae cleaners in the aquarium but they will accept a variety of veggie matter. They will also accept live and flake meaty foods.

The male Labeo Frenatus is slimmer than the female. Males also have a black stripe lining their caudal fin and the females do not.

It is a known fact that Labeo frenatus are egg layers but they are very difficult to breed in the aquarium.

The Labeo Frenatus is native to areas of Thailand and Indonesia in Southeast Asia.

Epalzeorhynchus frenatus is commonly known as the “red finned shark” or the “rainbow shark” in aquarium retail stores because all of its fins are red. They are commonly confused with the “red tailed black shark” which is a black fish with only one red caudal fin.

These pictures were priovided by Mihail of Romania.