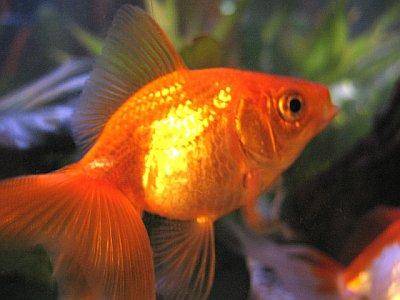 Guidelines for caring for Goldfish

Never add these fish to an uncycled tank, they are classed as a hardy species but they will suffer from stress with unstable water parameters and this will weaken their immune system leading to infections or disease.

Regular water changes should be performed on a weekly basis, at least 10-15% of the water should be replaced with clean, conditioned water.

Never let the temperature of the water rise above 24°C (75.20°F), they are not suitable for tropical set ups as they are a coldwater species.

It is recommended that fancy goldfish are not kept with the common goldfish, the fancy varieties are not as hardy as the common and bullying can occur leading to the demise of any fancy goldfish that you have in your aquarium.

The food for Goldfish needs to be low in protein but high in carbo-hydrates, this is why it is often best to use specialist goldfish flakes or pellets to feed this fish. It is a voracious eater so the feeds should be kept down to what the fish can eat in two minutes. This should be done twice daily. Shelled peas, some blanched leaf vegetables and bloodworms should also be included in the diet. Goldfish, like most fish will always give you the impression that they are hungry. Do not be tempted to overfeed, this will lead to digestive problems in the future.

Originally from Asia, Goldfish is related to the original native brown carps, selective breeding has created the modern gold strains.

Goldfish can be difficult fish to sex. In spawning mode the males will often display white spots on their gill plates.

It is often easier to breed Goldfish in ponds rather than aquariums but both are possible. The female will lay her sticky eggs on plants and they should hatch in 48-72 hours. The fry are very small when newly hatched but will grow in size rapidly. Their colouration will remain brown like their ancestors, but after 12 months the adult colouration should show through.

Under normal circumstances their lifespan is anywhere between 10-15 years but there are cases reported of Carassius auratus auratus living up to 45 years.

There are many variations to Goldfish and it has a reputation of being easy to keep. Unfortunately this has often led to its demise as they are sometimes kept in unsuitable tanks. As with any fish, they require optimum water conditions.

They can be kept with other species of fish that require the same water parameters such as some of the Danio species or even some minnow species but make sure that the tank mates are large enough before they are added to the aquarium or the Goldfish may see them as a meal.