This page is devoted to Gouramis, describes their demands and habits. There's a forum under the article where you can ask or share experiences.

A very common freshwater fish is the gourami which is diversely represented in the aquarium industry under the belontiidae, osphronemidae and helostomidae families. These fish come from waters through out Asia and Africa including oxygen poor roadside ditches and rice paddies. They all fall under the category of labyrinth fish because of their ability to breathe oxygen from the atmosphere above the water. There are many types of gouramis bred for the aquatic hobby and they range in a wide variety of sizes, colours, and temperament. Despite all the different variations, most gouramis are quite adaptable to different water conditions of temperature, hardness, and pH level. Optimum water conditions are wide ranged from soft to hard, 72 - 82°F (~ 22 - 28°C) and a pH range of 5.5-7.5. One very prominent trait that most gouramis possess is their long, skinny pelvic fins. They are used like antennas on bugs or like whiskers on a cat. The purpose of this feature is to feel their way through the water especially muddy, murky water for food and other objects. Most gouramis prefer to swim in the middle to top waters of the aquarium and will live peacefully with bottom dwelling fish. These fish are usually considered non-aggressive in most retail stores but they would be more accurately described as semi-aggressive especially males towards other males. Although, if gouramis are provided with enough swimming and hiding space, these individuals are capable of coexisting in the same aquarium. The giant gourami requires more space than the others for obvious reasons, because it is “giant” as far as gouramis are concerned and its potential size can be as much as 28 inches (71.12 cm) at maturity.

Gouramis are labyrinth fish named for their organs comprised of maze shaped tissue located above their gills that allow them to breathe oxygen from the air above water. At the water’s surface, the gourami will gulp in air which will then pass into the labyrinth organs. These respiratory organs contain blood vessels through which atmospheric oxygen can be absorbed from its gas form. Despite their air-breathing abilities, gouramis can still absorb oxygen from the water they live in. In fact, these anabantids need oxygen from both the atmosphere and the water to survive. The thing that sets them apart from other fish is that they have the ability to live in bodies of water that have a depleted oxygen supply. Among gouramis, there are also bettas, paradise fish and climbing perch that fall under the labyrinth fish category as well. The ability to breathe air not only allows these fish to live in waters with poor oxygen supply, it also allows them to survive out of water for a period of time as long as their skin and gills remain moist. The climbing perch has the uncanny ability to use this skill to travel short distances across land.

Most gouramis are bubble nest builders when it comes to breeding. Some exceptions are the kissing gourami who is an open-water spawner and the chocolate gourami who is a mouth-brooder. With bubble nest builders, the male will breathe air from the surface and dispense it through his gills. The mucus in his gills will trap the air as bubbles which then float to the surface. As he forms these bubbles he will gather them together and form a nest up against plants using plant matter to hold it together. This is usually done in a calm area without too much current so that the delicate nest is not disturbed. In the midst of building his nest the male will take time to display himself for the female. He spreads his fins to make himself appear larger and he’ll show off for her by wiggling his body back and forth. By the time he is done building the nest the female is usually ready to spawn. If the female is not ready to spawn when the male is done with his nest he will attack her. If this happens you will want to remove the female or the male may kill her. When the male and female are both ready to mate the male will wrap his flexible body around the female in a tight embrace. When they are done mating the female will lay her eggs. Most gourami eggs are buoyant so they float to the top. The male gathers the eggs and tucks them up into the bubble nest and proceeds to build up the nest some more. As for those whose eggs aren’t buoyant the male takes the job of catching them as they fall and then placing them up into the bubble layer. The female will lay as much as 1000 eggs depending on the quality of her health and her size. Once the eggs are all safely placed in the nest, the female is no longer needed and the male chases her away. The care of the off-spring is left to the male from this point on.

After two days, the eggs will hatch and the fry may start to fall out of the nest. The father will catch any who fall and replace them back into the bubbles. After 5 days the fry become free-swimming. This is the point at which the father is no longer interested in caring for the young and he is likely to eat them if he finds them. You’ll want to be sure to quickly remove the male at this point. In order to feed gourami fry, you’ll want to use liquid fry food for the first week, after which you’ll be able to feed them newly hatched brine shrimp and microworms. Fry powders can also be fed to the fry but keep in mind a well balanced diet also includes live foods. Feeding small amounts two to three times daily can be more beneficial than larger once a day feedings because the fry are so small. Subsequently, because of their size you’ll want to be extremely cautious of what sort of filter you use. They are so small that even the slightest current might suck them up or kill them. 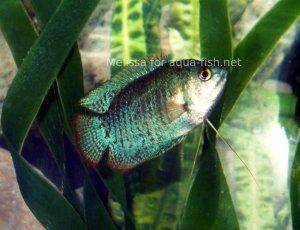 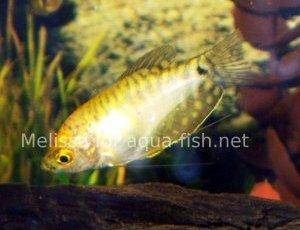 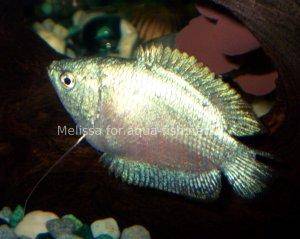 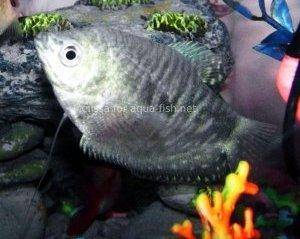