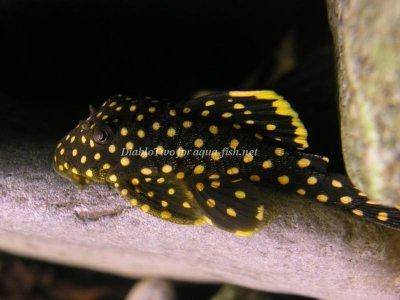 South America; Gold nugget pleco’s are to be found in the River Xingu, Brazil.

Gold nuggets have a very long life span, anything up to 25 years.

The Gold Nugget Pleco gets its common name from the wonderful markings that cover its body, each one resembling a small golden nugget. They inhabit fast flowing waters so it is best to try to recreate these conditions in the aquarium as much as possible. The water flow can be controlled by positioning of the filter outlets or the addition of power heads will help with the circulation. The aquarium should be large enough to cater for their adult size, at least 4 feet (121.92 cm) in length and have a large enough footprint to allow them to turn easily without being cramped. Minimal decoration is required, the addition of rocks and a sandy substrate is ideal, keep the lighting dimmed and add floating plants to help with this and also to create a good effect for the observer. They are intolerant of poor water conditions and they are also high waste producers so regular large weekly water changes are a must to control any toxins etc. Gold Nuggets are not tolerant of their own species and are very territorial to other bottom dwellers. Adults have been known to kill each other in fights so it is recommended to keep one specimen per tank. Keeping more than one plec in the aquarium is always going to cause problems due to territorial issues but if the aquarium is large enough it will give other bottom dwellers the space they require to live in harmony.

Gold nugget pleco’s are known to be grazers in the wild but in the aquarium blood worm, chopped shrimps, along with courgette or cucumber are readily accepted.

The best way to sex Baryancistrus sp. L177 is to look at their foreheads; males have a wider and flatter outline, the female’s forehead tends to be rounder.

Strong water currents tend to make these fish spawn. Gold nugget pleco’s will use caves for spawning sites and can be secretive while mating. The fry are not difficult to grow on but they are very slow growing. It can take up to six months for them to reach a length of 2 inches. Initially they should be fed newly hatched brine shrimp but as they grow larger foods can be offered.