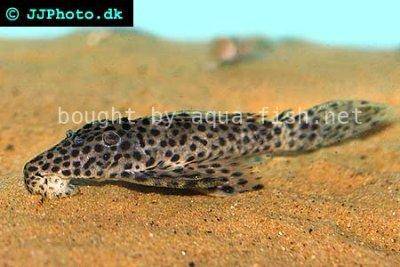 South America; Golden vampire pleco are found in the waterways of Brazil.

The expected life span for Leporacanthicus heterodon is 5-8 years.

Although the Golden Vampire Plec may not be the largest plecs available in the fish keeping hobby, they still show an aggressive nature towards other bottom dwelling species and as such should not be housed with other fish that inhabit the lower levels in the aquarium. They tend to leave tank mates alone that inhabit higher levels so can still make a good addition to a community set up in general.

They will require a larger aquarium, at least 48 inches (~ 122 cm) in length and as they do like to burrow a sandy substrate should be used or very fine and rounded gravel to prevent any damage to themselves occurring during this process.

Hiding places should be provided using rocks or wood and as with most plec species, dim lighting should be used to make them feel more secure. They are high waste producers so use a filtration system that can handle this and keep the water well oxygenated by using small power heads or aiming the outlet nozzles from the filter towards the water surface to increase gaseous exchange.

Regular water changes must be performed, at least 10% on a weekly basis to maintain high water quality.

The Golden Vampire Plec gets its common name from the large teeth that it develops in it's upper jaw which look like “fangs” commonly associated with vampires!

Golden vampire pleco need a varied diet to keep them at their best. Use a quality flake or pellets for the staple diet but vary this with cucumber, shelled peas, algae wafers. They will also require meaty foods like chopped cockles and mussels but only feed these as treats twice a week.

Males tend to display a brighter colouration and have a larger dorsal fin. Their head will be longer and broader compared to the females.

There are no reported cases of Leporacanthicus heterodon breeding in the aquarium.