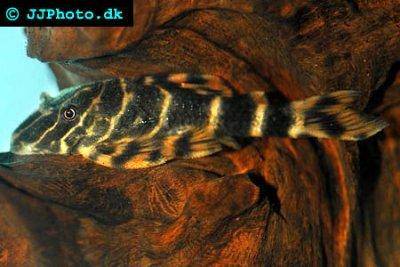 The Clown Pleco is an herbivore that mostly eats algae and plant matter in the aquarium. They should also snack on a little bit of wood now and then to help with digestion.

Once mature, the males will develop jagged points on their back. The females become plumper in their belly area.

A pair can be conditioned on dried bloodworms with the temperature slightly raised. The female will find a cave to lay eggs in. The babies can be fed newly hatched brine shrimp and they should also have some algae and a little bit of wood for them to graze upon.

This is a very peaceful species that will tolerate most other fish. Compared to other species of plecos, this one stays pretty small. It only grows to about 4 or 5 inches. The Clown Pleco is no picky when it comes to water conditions but any changes in temperature or acidity should be done gradually.