The article below offers information compulsory for raising and breeding Oscar fish properly, their behavioural issues, tank mates, FAQ and forum, answers on questions asked by our visitors; And we also have another page devoted to Oscars, be sure to visit it too as it contains personal experiences of fish keepers: Oscar fish profile. Don't forget to tell us about your Oscar fish at the bottom of this page, we'd love to hear your experiences or questions!

The Oscar fish are renowned for their high intelligence and in time they will recognise their owners becoming very tame indeed, this has earned them their nickname of “aquatic puppies”. Each specimen has their own characteristics and behaviour patterns similar to other larger species of cichlids that are kept in aquariums. Oscar fish can be fussy about the décor in their aquarium and will often re-arrange the position of the décor to suit themselves, occasionally picking up the décor with their strong jaws and placing it elsewhere, they have even been known to try to spit them out of the tank on occasions despite some of the décor being quite heavy, plants, rocks or wood makes no difference, if the Oscar wishes to move it it will unless the décor is weighted down sufficiently.

Because of this the décor should be kept quite simple using a sandy substrate (the Oscar fish likes to burrow at times), heavy rocks also make the perfect décor but these should be added before the sand to prevent any chance of them toppling over when burrowing does occur. Hardy plants can also be added, Anubias are a prime example as these have a repulsive taste to fish and the Oscars should leave them alone.

The thickness of the aquarium glass should also be taken into consideration as these fish may sometimes bump into the glass, a thickness of at least 1 cm (0.4 inch) is ideal preventing any chance of breakage, being safety conscious is important when keeping the Oscar fish. 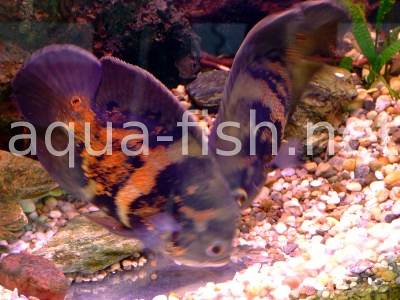 Behavior and litres/gallons per specimen

One of the most amazing behavioural patterns of Oscars is when they act dead, this is their natural behaviour as this technique is used when they’re trying to catch smaller fish in the wild. Bear in mind that these fish may play dead in case they feel threatened by another stronger fish that's present in their tank - it's a submissive behaviour. Oscars are generally considered aggressive fish, however their aggressiveness can be reduced through reasonable tank size and it's a known fact that Astronotus ocellatus do well with large Plecos and mid-sized South American cichlids (for more information about tankmakes check the The tankmates paragraph below). One fully grown Oscar will require approximately 150 litres (40 US gallons, 33 Imperial gallons) of water, however it doesn't mean that a single specimen can be kept in a 150 litre tank! Instead, tank should be large enough to swim and hide. Display tanks are perfectly OK for these fish.

Oscars tend to be more aggressive/territorial when kept in a small group, say 2-3 specimens. Aggressive behaviour often results in injuries, open wounds which are ideal place for fungal infections!

Pictures of the Oscar fish

Care and feeding habits of your Oscar

Beef heart can be offered to your Oscar too, however it must not become their main diet. Feeder fish (Guppies or Goldfish) are considered suitable food by many fish keepers, however these might pass a disease to your fish, thus feed them feeder fish only if you're 100% sure that feeders are of high quality, ideally breed your own feeder fish. As it's already mentioned above, Oscars do require a lot of space, it's necessary to emphasize this once more! If you read comments under the article, you'll realise that aquarists often underrate tank size.

Oscars thrive in tanks with heavy rocks and driftwood, they don't like bright lighting. Plants are perfect addition, however this species might rearrange them as per own expectations. Due to size and amounts of excrement produced by these fish, excellent filtration is crucial - external canister filters are recommended! Test water on a regular basis for these values: pH, ammonia, carbonate hardness. Ammonia readings should be nil, carbonate hardness must be 4 or greater. The optimal temperature is between 26-28 °C (78-82°F).

If submersible aquarium heaters are being used then these must be covered over with a suitable heater guard, the Oscar fish is more than capable of breaking the element glass on the heater plus using the guard removes any risk of your Oscar fish receiving burns from the heat. 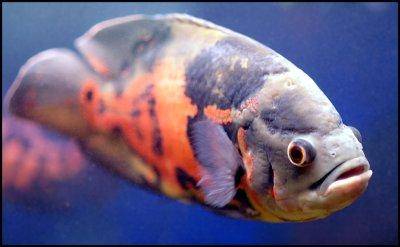 Special thanks to Abel Guerrero for his picture.

The best tankmates for Oscars are Large Plecostomus and other large Neotropical Cichlids such as Texas Cichlids, Jack Dempseys, Salvini, and other cichlids from South America which are the same size or bigger. There are several varieties of Oscars, Pink Tiger Oscars tend to be least aggressive, thus never mix Red Oscars or Tiger Oscars with Pink ones! The easiest way how to find out who's the boss is during feeding - the fish that eats first and most is the boss. Remaining Oscars are lower in the hierarchy tree. Think twice before buying an Oscar as plenty of people end up with Oscars only even though they've planned a community aquarium; The Oscar fish will simply eat small species!

Fast tetras can be kept with Oscars in case they got used to each other as juveniles.

Breeding isn’t very difficult if you keep a pair. Perhaps it's repetitive, however I’d like to emphasize the importance of high quality of water. Clean water is required, as well as a stable temperature of about 28°C (82°F). It's difficult to trigger breeding in cold water or water that contains high levels of ammonia, smells or is simply insufficient in terms of quality. Techniques that work the most are as follows:

If you keep them in the same tank prior to breeding they will probably need some motivation, so remove a male for one or two weeks if the above-mentioned techniques don't work. Breeding goes well when you feed your Oscars live or frozen food. Use heavy rocks, they will clean them in order to lay eggs. Large driftwood could help this process too. Generally, they breed like all large South American cichlids.

Once the eggs are laid, both parents will defend the eggs. It isn't necessary to remove the eggs, but a stressed pair can eat them. Immature specimens often eat their first eggs, it should get better as time goes by. Oscars become sexually mature at the age of 18-24 months. As usual, fry should be fed Artemia salina, Daphnia, egg yolk or microworms once newborns consume their egg sac.

This article is available in German: Der Fisch Oscar. 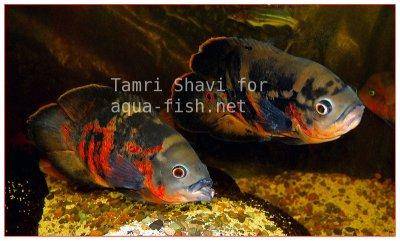 Feel free to visit Oscar Care Basics at firsttankguide.net too!

Since we merged aqua-fish.net/answers with articles, here below are questions that often fishkeepers ask. Some of the listed questions may have been partially answered in the article below, however listing them "as is" makes all questions easier to read! You're welcome to post your questions too, just ensure that they're unique - use a form at the bottom of this page for this purpose.