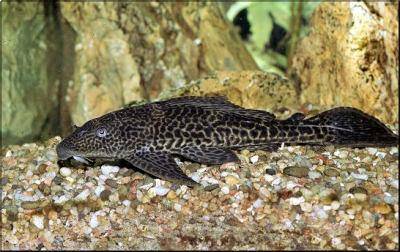 This herbivore will accept sinking algae wafers or tablets. The Multiradiatus pleco will eat most types of algae growing in the aquarium and when scraps of food sink to the bottom substrate this fish will clean it up.

It is difficult to determine the sex of Multiradiatus pleco except that the males could be more slender than the females.

This egg layer requires a smooth surface, preferably an enclosed one to accommodate the shyness of this species. The male will protect the eggs until they hatch approximately 9 days later. The fry will eat newly hatched brine shrimp and powdered fry foods.

A Multiradiatus pleco can live for approximately 10 years.

The Multiradiatus pleco is native to Brazil of South America, although now it is bred in regions of Asia for aquarium retail. This species has been introduced to freshwaters of Hawaii, Florida and Puerto Rico.

Liposarcus multiradiatus is commonly known as the “common pleco” to most aquarists, although there is some debate as to whether this is the “common” species or if it is the Hypostomus plecostomus. The difference between each species is in the number of rays in the dorsal fin. Many beginner aquarists make the mistake of purchasing this fish as a baby thinking it will come in handy for aquarium maintenance. Since these fish grow and grow until nearly two feet in length, it is not a practical species for most aquarists to keep.