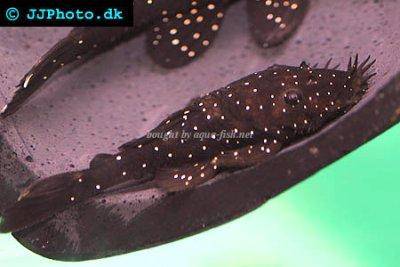 Males have more bristles on their heads and the females are often smaller.

PVC piping makes a good spawning site for Ancistrus sp. L255. The female will spread her fins and lay her eggs inside, after this the male will tend the eggs fanning the water. The male will protect the eggs which should hatch 4-5 days later. The fry will venture out a few days after that. They should be fed initially on newly hatched brine shrimp.

Spotted medusa pleco’s are a shy and timid fish, tank mates should be chosen carefully. Slow moving cichlids or charachins are ideal. Hiding places should be added to the tank as they tend to hide away during the daytime.