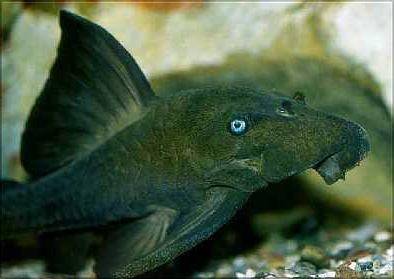 The Blue eyed pleco originate from South America, namely Venezuela where they inhabit the waterways of the Rio Negro. They prefer waterways that contain foliage and fallen branches plus a strong water current.

The Blue eyed pleco was once a very popular species for fish keepers but over recent years their popularity seems to have declined somewhat. They are classed as a peaceful species occupying the bottom levels of the aquarium but if more than one specimen is kept they can become territorial with each other. They get their common name from their striking eyes which display a beautiful blue colouration and their body colouration also has a blue tinge to it.

They are often sold as juveniles but adult specimens can reach a length of up to 11 inches so these are not for smaller aquariums. It should be noted that plecs possess sharp spines on their bodies and as such should be handled with care and netting them can cause them to become badly tangled so always bear this in mind.

Caring for the Blue eyed pleco is a long term commitment, if cared for correctly you can expect an average lifespan of between 15 to 20 years of age.

The Blue eyed pleco will require room in the aquarium and the minimum tank size should be at least capable of holding 120 gallons (480 ltr) of water. They are mostly active at night and will require some swimming space around the lower levels of the aquarium, they will also appreciate the addition of bogwood, not only to give them hiding places but they will gnaw on this to aid their digestion. They are high waste producers so the filtration system must be capable of handling this large amount of water volume and regular water changes of 10% weekly must be performed to back this up. The outlets from the filters should be aimed at an angle which will create some water flow. They prefer cooler water temperatures so this should range between 21-24°C (70-75°F) and the pH should range between 6.0-7.0. The Blue eyed pleco is classed as a peaceful species and should not bother other tank mates but do not keep this fish with aggressive species as they can become intimidated and hide away a lot. Once they have settled in the aquarium they may become more active during daylight hours, especially at feeding times.

The Blue eyed pleco is classed as an omnivorous fish so as such will require vegetable matter as well as meaty foods in their diet. For the staple diet it is recommended that you offer pellets or wafers but this should be varied with live or frozen foods such as blood worms, chopped mussels, chopped shrimps or brine shrimp. Extra vegetable matter can be given by the addition of chopped cucumber, zucchini, or blanched peas.

Very difficult to sex, expert breeders can sex these fish by turning them over and looking at their vents but for most keepers this can be very hit and miss.

There are no reliable reports of the Blue eyed pleco breeding in the aquarium but it is believed that they are cave spawners which involves making a cave in the river banks and spawning there.