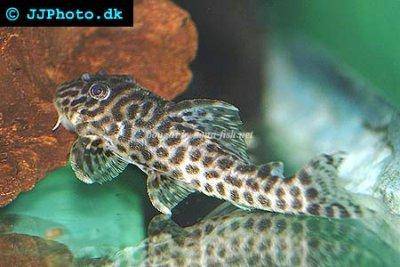 Peruvian panther pleco is omnivorous but does prefer meaty foods to supplement the diet. Feed with quality flake or catfish pellets and add blood worms or brine shrimp to the diet.

Difficult to sex, it is believed that the male has a more extended pectoral fin.

There are not many reported cases of aquarium breeding but it is thought to be a cave spawner with the male protecting the off spring.

The expected lifespan for Hypancistrus sp. L174 is 15 years.

Hypancistrus sp. L174 is a fairly easy species to look after but high water quality must be maintained. They are a fairly shy species and require caves, hiding places with dim lighting over the aquarium. The name given to this fish is a bit confusing due to it’s origins but it is also sometimes called a false zebra plec.

Bought by aqua-fish.net from jjphoto.dk. One picture was provided by Joe.