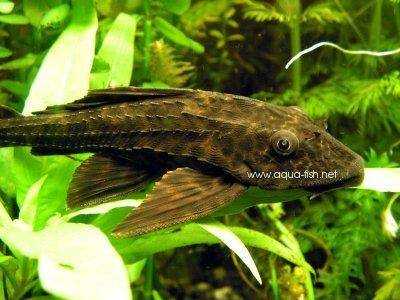 The spotted sailfin pleco can be found in South America, namely the water ways of the Amazonian and Orinoco basins situated in Brazil, Venezuela, Peru and Ecuador.

Usually up to 10 years. However, 15 years lifespan has been reported.

The spotted sailfin pleco can grow up to quite a large size in the aquarium when they are mature, they are sold as small juveniles but make sure that you can house them correctly as adults. Adult specimens can reach a length of up to 50 cm so make sure that the aquarium is three times as long as their length and twice as wide. They are not nocturnal but will hide away a lot on the daytime, provide hiding places by adding décor such as wood or rocks, it is thought that wood is part of their diet helping them to digest their food so bear this in mind.

They do become active in the evenings so this is probably the best time to offer them food.

The spotted sailfin pleco is often added to the aquarium as a cleaner, digesting any algae present but they still have their own dietary needs besides this trait. They are classed as omnivorous and as such require a mix of vegetable matter and meaty foods. They can be fed on chopped earthworms, blood worms or chopped shrimps, for vegetable matter offer them lettuce (not romaine), cucumber, courgettes or blanched spinach.

It is best to feed them in the evenings as well as early mornings and younger specimens may require feeding three times a day.

Males’ and females’ bellies differ. Since females are those who lay eggs, their bellies should be rounder a bit. On the other hand, if fish are overfed their bellies look the same.

Due to the large size of these fish it is very hard to breed, they require a lot of space and commercial breeders will breed them in outdoor ponds as long as they are housed in warmer climates. Aquarium spawnings are virtually unrecorded, in the wild they are classed as cave spawners meaning that they will use holes and burrows in river banks to deposit their eggs.

Some pictures were bought.