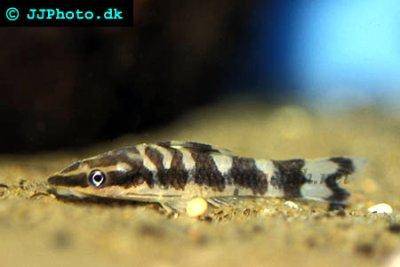 The Dwarf Sucker is mostly herbivorous and they prefer algae and vegetables. They will accept softened peas, zucchini and spirulina. Algae wafers and pellets are good supplements when algae are not plentiful in the aquarium. Dwarf Suckers can be conditioned to accept a variety of other foods such as flakes and freeze-dried worms.

Male Dwarf Suckers tend to be slightly smaller than females. The females are plumper when viewed from above, especially when she is full of eggs. The males also have extensions of their genitalia that become apparent when fully mature.

Little is known on the breeding habits of these egg layers. The fry need to be fed lots of veggies to promote good health.

This species has a life expectancy of 4-5 years.

The Dwarf Sucker is endemic to Peru in South America. They are mainly found in the Ucayali River which branches off the Amazon River.