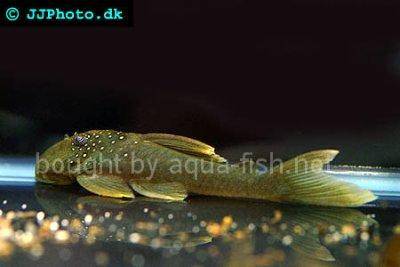 South America; Green phantom pleco’s are found in the waterways of Venezuela.

The expected life span for Green phantom pleco is 12 years.

Although the Green Phantom Pleco are not classed as a delicate species to care for, they do have specific needs to keep them healthy and happy. As juveniles they can be housed in smaller aquariums but once mature they will require larger aquariums that are at least four feet (121 cm) in length. They originate from moving waters so this will need to be replicated in the aquarium by careful placing of the outlet nozzles from the filters or even using small power heads. They will also require hiding places by using rocks or wood to create these. Bright lighting should be used to promote some algal growth as they will love grazing on this and make sure that the water quality is kept high by performing regular water changes.

As juveniles they are a relatively peaceful species but as they mature they will become more aggressive and definitely territorial. To overcome this only add one specimen to the tank or if more than one make sure they have plenty of space to create their own territories.

Other bottom dwellers should be avoided or they will also become targets of their aggression.

Feed Green phantom pleco’s with sinking pellets and algae wafers for the staple diet. Provide the fish with meaty foods by giving it treats of blood worms and brine shrimp twice a week.

Allow for algal growth in the aquarium, for aesthetics keep the glass clean but on the décor they will graze for food. Always make sure that they do not show any signs of sunken bellies as this could be an indicator that they are under nourished.

Male specimens will develop a broader appearance as they mature, particularly around the head area and they may also develop more elongated dorsal spines.

As of yet, there are no reported cases of Baryancistrus demantoides breeding in the aquarium. It is known that in the wild they do deposit their eggs in the caves of the river banks, parental duties and guarding the eggs is then undertaken by the male.