Advice by Susan, keeping fish since 1996

This page is devoted to aquarium air pumps, answers FAQ and contains forum under the article and in a case you came here searching for online suppliers of air pumps, simply click this link. We'd love to hear your experiences with various pumps, so other aquarists will know better what to purchase and what to avoid, therefore use a form at the bottom of this page to share your knowledge or to ask questions!

Aquarium air pump is a device that brings air into the aquarium. The air pumps are usually very alike however one can choose from many types of decorations, from which the air will come out to the aquarium. The most common is just an air stone. which works the way the air stone is put into the aquarium and the pump is started. Another forms are aquarium ornaments like treasure chests, shells, which open if the decoration is full of air, divers and many more.

Such aerating devices produce bubbles and the bubbles move the water surface which is how they aerate the water. Choosing the right air pump is not so difficult, you just have to choose it according to the depth of your aquarium and the pressure you need for the ornament (i.e. the deeper the tank, the greater pressure and wattage is needed for a pump to work effectively). On the other hand if you are choosing an ornamental aerator, you are choosing it according to the facts how you like it, or which would look best in your aquarium. Many aquarists prefer to run several aeration devices simultaneously in order to achieve highest possible levels of oxygen in a fish tank.

Installation of a device is usually described in enclosed instructions which, in most cases, is to take out the air pump from the box, put the pump somewhere above the aquarium and the air stone comes into the aquarium, and by plugging the pump into the electricity will make it work. Bear in mind aeration stones get filthy after some time, because the holes may caulk and you have to replace the stones in such a case.

How does an aerator work

The pump gets the air though a little pipeline and then the pump blows out the air to the water trough the stone, or ornament. The stones have small holes in them and from there comes the air. This stone may be long from just a few centimetres to a very lengthy one, which makes a wall of bubbles and which also requires a powerful aerator as it needs more power to push the air into the whole stone.

Why to aerate water

It is because fish and plants need air. Fish like humans breathe oxygen and convert it into carbon dioxide. In the nature, the substrate at the bottom levels of rivers or creeks, is covered by plants and they produce a lot of oxygen (but only during the day, at night they breathe oxygen too, so there is less oxygen in the water, therefore do not turn off the aerator at night), however usually there are not enough plants in an aquarium to cover the whole process the same way like in the nature. The next reason for aeration is to create a natural movement of water which will also move toxins and fish waste in general, and allows their efficient filtration. If there were no aerator, the fish waste could settle everywhere in the tank: the plants, decorations. Not only it wouldn't look good, it is not good for the health of the plants and fish.

On the other hand, one may encounter several issues when using air pumps. For example in smaller aquariums these devices are able to create a strong movement of the surface and some fish may hate it, like fish, which make bubble nests on the surface. Such fish include bettas, paradise fish and gourami. Another aspect you should take into consideration is the deeper the air stone or decoration is in a water column, the bigger bubbles will reach the surface and the more will the surface move. The whole process even may splash out the water from the tank, furthermore some pumps may be noisy.

Generally, an aquarium air pump could be a very nice decoration and useful equipment of your fish tank and it has the ability to create many different types of bubbles, which can look very nice and its capability to aerate the water makes it a good subject of your interest. They don’t cost much and they aren’t a heavy energy wasters. Usual energy consumption of these devices is just from 5 to 10 watts per hour. In addition bubbles from any aquarium air pump can be illuminated by colourful light source. This way you will create very unusual decoration which will attract people looking at your fish tank for many hours. 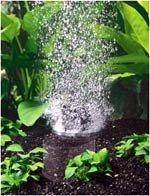 Images sources: aquatics-online.com; (a link to haddawaymj.freeserve.co.uk has been removed on 6 March 2010 as the website was not loading)

Due to merging aqua-fish.net/answers with articles, we moved the following questions here. You're welcome to submit own questions too, however firstly make sure that they're unique and not yet answered on this page, please.

If one or more links from the below-shown list don't work, tell us via the form that can be found at the bottom of this page, please!