This page describes how to take care of Electric yellow cichlid properly including feeding, breeding and in case you'd like to ask questions or share experiences we have forum under the article!

The Electric Yellow Lab earned its common name because of the striking yellow color of its body. Also known as the Labidochromis caeruleus, this shy and peaceful species is very popular among hobby aquarists. Any beginner aquarist can successfully keep this fish because they are undemanding of water conditions, they will accept a wide variety of foods, and they are very easy to breed. Other names for this mbuna cichlid are Lemon Drop Cichlid, Lemon Yellow Cichlid, Electric Yellow, and Yellow Lab.

The bold yellow color of the Electric Yellow Lab stands out making it a lively addition in any cichlid tank. This fish will get to be as long as 6 inches which makes it a great candidate for the aquarium since it is not a very large species. A black stripe running through the dorsal fin may be either bold or faded and in some cases not existent. Males will have black pectoral fins and a black stripe running along the edge of the anal fin. The strongest male will generally have the boldest black stripes of the whole group. Some fish even have a little bit of black shading present on the caudal fin. Otherwise the fins are white and slightly translucent instead of yellow like the rest of their bodies. The eyes of each fish will either have full or partially black eyes which provide the perfect contrast for a very attractive fish.

In the wild, the L. caeruleus is more often found in a light blue morph which is commonly referred to as the Blue Streak Hap. This color variation has a better chance of survival since they are easily camouflaged in the dark waters of the lake. The yellow morph stands out like a sore thumb and is much more likely to get snatched up by predators. Due to the ease of breeding Electric Yellows in captivity, they can be widely represented in the aquarium hobby despite their tendency to parish in the wild. In comparison to the increasing numbers of yellow, the Blue Streak numbers are dwindling in captivity due to lack of hobby interest. Many hobbyists do not even know they exist in any other color besides yellow.

Electric Yellow Labs tend to be shy for cichlids and they require tight spaces to hide in. They are mildly aggressive which is somewhat unusual for mbuna cichlids since they have the tendency to be pretty hostile. Despite their minor aggression they are still cichlids and therefore dangerous to smaller, weaker fish such as guppies and neon tetras. The Electric Yellow Lab will undoubtedly nip at fins and terrorize smaller fish which can and will eventually lead to death for the weaker species. L. caeruleus tend to do very well in a species tank as long as there is one male for every 3 or 4 females, and also plenty of hiding spaces for their shy personalities. If a community tank is what you desire then they should be placed with other mildly aggressive African cichlids and possibly a few docile bottom feeders.

Electric Yellow Labs are omnivorous much like most other cichlids. In the wild they feed on insects, larvae and crustaceans. Their diet should contain a good amount of roughage in order to help aid in digestion. Cooked peas, zucchini and lettuce are very practical items for greens. Spirulina can also be included in the diet for the Electric Yellow Lab. This substance is blue - green algae that have a lot of health benefits as well as color enhancing qualities. This species can also be fed a combination of proteins from live, frozen or dried foods. With the right diet and care this species can live for approximately 10 years.

L. caeruleus is endemic to the northwestern, rocky shores of Lake Malawi in Africa. The brilliant yellow L. caeruleus is only one color variation among many, although this variation is the only one that goes by the name Electric Yellow Lab. Because of the bright, outstanding complexion of this color morph, camouflage can be somewhat of a problem. It is for that reason that this variation of L. caeruleus occurs in wild numbers that are not even close to as large as captive numbers. This yellow variation has only been discovered for the aquarium hobby within approximately the last 15 years or so.

Electric Yellow Cichlids are labeled as mbuna species, which indicates they dwell among the rocks, caves and cliffs of the lake. Rocks and caves in the aquarium are highly recommended due to the shy disposition of this species. When dealing with fish that love to hide it is a good idea to provide private dwellings in which they can retreat to incase they feel threatened. The more comfortable your Electric Yellow feels, the more likely it is to venture out into open waters. Hardy plants that provide extra cover can add to their feelings of safety and security as well.

The Electric Yellow Lab is a hardy species that can learn to adapt to reasonable living conditions outside of their comfortable range. Lake Malawi’s water conditions are hard and alkaline with an abundance of oxygen, all of which are preferable settings when keeping African cichlids at home. Keep the water at a pH range between 7.5 and 8.5 with a temperature ranging from 75-82°F. The water hardness should fall somewhere between medium hard to hard depending on what the other tank mates are able to handle. The size of the aquarium with 4 to 5 Electric Yellows should hold no less than 30 gallons of water. These fish, while not hyper, are still quite active and can use some extra swimming space.

Electric Yellow Labs are maternal mouth brooders. In the courting process a pit is dug in the substrate so that the female has a place to lay her eggs. The eggs are fertilized by the male and then picked up shortly after by the female. The clutch is held in a pouch in the female’s mouth for approximately 5 weeks. During this time the eggs will hatch, the fry will absorb their yolk sacs, become free swimming, and learn to fend for themselves. All the while the female holds her offspring she is not eating and therefore not keeping up her strength to defend herself or her young. It is advised to move the mother to a private nursery tank in order for her to carry her eggs and fry with minimal danger to either. Take extra special care to gently approach her with the net while moving her to another tank or she may drop her clutch while predators are near, making the eggs or fry an easy target for a snack. 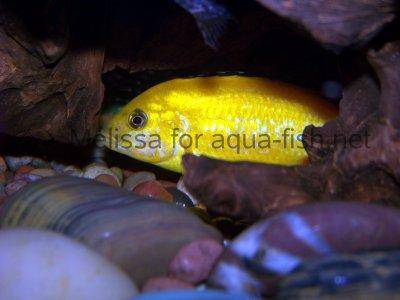 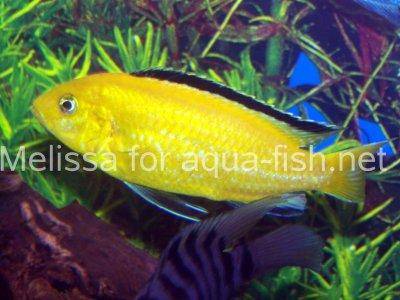