This page covers every aspect of raising Frontosa cichlids in fish tanks; From aquarium set-up to variations of this specie. Use a form at the bottom of this page in case you can't find answer on your question, sharing experiences is welcome too - we'd love to hear about your Frontosa's!

The Cyphotilapia frontosa is named Cypho- meaning “hump” in Greek, -tilapia meaning “fish” in Tswana (the language spoken around lake Ngami), and frontosa based on the Latin word Frontis meaning “with big forehead.” Nicknamed frontosa, this very distinguishable fish is a highly prized and highly priced cichlid in the aquarium industry. The more common variation in retail is from Burundi which can run anywhere from $12 to $15 for juveniles. Other variations can be considerably more expensive because of their vibrant blue coloration and the fact that they are not as easy to breed. They can cost around $250 for the juveniles. Despite the high price, these fish are definitely worth the investment because they are an attractive and hardy species that can live up to 25 years.

Frontosas are hunters who like to work smart, not hard. They hunt for food at dusk, just when their prey would be falling asleep thus making themselves easy targets. In an aquarium setting this fish will eat a variety of frozen and live foods in addition to prepared flakes and pellets. These carnivorous predators are best kept in large groups much like the colonies they are found in naturally but they require an abundance of space because of their potential size. Multiple males can be kept together for this particular species as long as you provide them with adequate hiding places that are large enough for them to dart in and out of. Be sure to secure rocks and caves so that injuries do not occur when they do retreat clumsily. I say they are clumsy because they are not conditioned to moving quickly unless there is a need to do so, for this reason, they are much more graceful at a slower pace.

It is very important for frontosas to feel safe and secure. Keep them in a tank no smaller than 85 gallons with plenty of rocky caves for the males. The females should have the option for a hiding place as well but they do not require them as the males do. This type of fish likes subdued lighting because it mimics the lighting of their natural habitat in the deeper regions of the lake. Bright light makes them feel more anxious and exposed. Frontosas are sensitive to chemicals and pollutants so be sure to do frequent partial water changes. Keep your aquarium between 75º- 79ºF with moderate to hard water and an alkaline pH ranging from 7.8 to 9.5. Frontosas like to dig in sandy substrates but if you have gravel they will dig in that too. They are known to dig up plants even if they are securely rooted, but they are not likely to shred them as many other cichlids would.

Sexing for this species is commonly determined by the hump on the head which tends to be larger on males and smaller on females. However this is not a reliable way for sexing juveniles because the hump comes about with maturity in both sexes. As frontosas start to mature, the male will grow quite a bit larger and faster that the female. It takes years for this species to reach sexual maturity and the number of years depends on the different variations. Some can take up to 3 years to become sexually mature.

Frontosas are mouth-brooders that do not perform the usual courting rituals. There is no display of fins and no showy dance performed by the male for the female. It’s a fairly straight forward procedure when the male excavates his cave in order to make it presentable for the female to want to enter. Upon entering his cave, the female lays her eggs on a spot that he has cleared for her. The male then fertilizes the eggs followed by the female scooping them up into her mouth. The female will produce about 50 of these large eggs and keep them in her mouth as mouth-brooders do. This is when you will want to remove the male so that he will not have the chance to devour the brood. The mother will keep the fry in her mouth for as long as two months. The fry are relatively large and grow relatively quickly; they will eat a variety of foods once they are released.

When breeding frontosas, be sure to keep the different variations separate because mixing them can result in deformed or sterile offspring.

The true Cyphotilapia frontosa, the only one of these species with seven stripes, comes from one specific region along Lake Tanganyika, which is Kigoma. What used to be classified as C. frontosa from the regions Mpimbwe, Zaire and Zambia, are now classified under a different name: Cyphotilapia gibberosa. There are subtle, yet very technical differences that set the frontosa apart from the gibberosa like the size and shape of the hump, number of scales and slight fin variations. With the frontosa and gibberosa species so clearly defined the only thing left to do is to rename the variations that come from Burundi, Kavala and Karilani. It is only a matter of time before experts come up with those new names. However, in the retail aquarium industry I believe the popular name “frontosa” will generically still be used by the common hobbyist for all the different variations of this species.

Despite the very common appearance of all the different varieties of frontosa, these fish come from varying depths all over Lake Tanganyika from as shallow as 15 feet to as deep as 180 feet. Much like humans, these fish have to go through the same decompression phases when coming up from the extreme depths. Bringing up these fish too quickly enlarges their swim bladder until their intestines are literally forced out of their body.

The most popular variations of Cyphotilapia are from Burundi, Kavala and Karilani.

The less popular species but are still important to mention are from Kigoma, Mpimbwe, Zaire and Zambia. 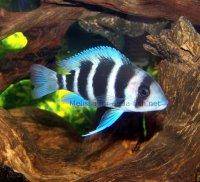 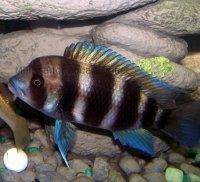 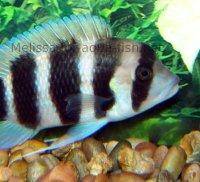 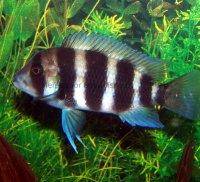 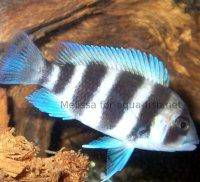