How to care for Blue Dolphin Cichlids

This page is devoted to Blue Dolphin Cichlids and caring for these fish when kept in fish tanks - in addition there's a forum under the article too! You should also visit the following page: Malawi blue dolphin profile as it lists requirements in an easy-to-read format. Bear in mind we'd love to hear about your Malawi blue dolphins, so submit your story at the bottom of this page, please!

Blue Dolphin Cichlid is a common name for this species that is known by either of two scientific names: Cyrtocara moorii and Haplochromis moorii. This fish earned its common name because it is blue and the shape of its head closely resembles the shape of a dolphin’s head. Other common names include Malawi Blue Dolphin, Dolphin Cichlid, Blue Moorii, and Hap Moorii. This relatively peaceful cichlid is gorgeous to look at due to its bright, shiny blue colouring.

The Blue Dolphin Cichlid has a nuchal hump protruding from its forehead and it has bulging lips that extend from its face like a bill. Both of these physical characteristics combined resemble a dolphin. The nuchal hump on its head starts to develop as the fish matures and gets progressively larger as time goes by. This hump develops in both male and female specimens. They are metallic-blue in colour and may or may not have a scattering of black splotches all over their bodies. This eye-catching species can grow to be a maximum of 10 inches (25.40 cm) in length although females tend to be slightly smaller than males. This species has the potential to live for approximately 12 to 15 years. They are slow growing and take a long time to reach sexual maturity.

This relatively peaceful fish is as non-violent as one can expect from an African cichlid. But don’t let that fool you because they could still be capable of eating any fish that is small enough to eat. The Blue Dolphin should not be in the same community aquarium as small, non-aggressive fish such as tetras and guppies but they make great tank mates with species such as various mildly aggressive cichlids, plecos, synodontis catfish and corydoras. They do really well in species tanks as long as there are more males than females for breeding purposes. The male needs to have options for breeding just in case one of the females is not ready to lay eggs just yet. Malawi Blue Dolphins can get aggressive while spawning or when it comes to territories if there are not enough for everyone, so be sure to provide sufficient swimming space to prevent disputes.

Blue Moorii Cichlids are considered to be micro-predators because of their hunting habits in the wild. By following substrate diggers they can feast on the micro-organisms that get stirred up into the water. In captivity, this carnivore will accept a number of meaty foods such as brine shrimp, bloodworms, beef hearts, dried flakes and pellets. There is not much need for greens in their diet but they are likely to accept it as a dietary option if nothing else is available. Just know that a high protein diet is very necessary for their health and growth. 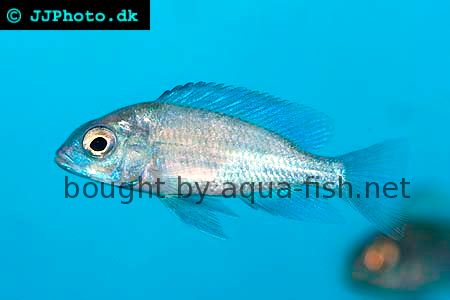 Lake Malawi is a lake in East Africa which is home to many cichlid species including the C. moorii.

This species can be found in the shallow, sandy areas of Lake Malawi. They tend to stay away from the rocky cliffs of the lake where the mbuna cichlids dwell. If rocks and caves are incorporated into the aquarium décor, they should be kept to a minimum and set out of the way to provide this species with maximum swimming space. They are diggers that thrive where there is sand or fine gravel substrate.

C. moorii are very hardy fish that are not very particular about their water conditions. Being from Lake Malawi they are accustomed to hard water between 10 and 20°N dGH (~178 - 357 ppm, 3.57 - 7.15 mEq) with an alkalinity falling somewhere between 7.2 and 8.6. The temperature should be in the range of 74 to 81°F (~ 23 - 23°C). Provide fresh, flowing water with plenty of oxygen and free swimming space. Because of their ability to grow fairly large the Blue Dolphin Cichlid should be provided with a minimum of 125 gallons (~ 104 Imperial gallons, 473 litres) for 3 females and 1 male. If the goal is to breed this cichlid species be sure to perform frequent partial water changes to entice them to reproduce.

It is extremely difficult to distinguish the difference between males and females of this particular species. Both males and females develop the nuchal hump unlike many other cichlid species where only the male develops the vestigial hump. Males are generally larger than females but it would be hard to know for certain whether a captive specimen is grown to full potential or not. Colour brightness and clarity is not a dependable way to determine the sex of the fish either because both males and females alike can have a vibrant show of colour.

Many of the specimens found in aquarium retail stores are wild caught. This is due to the fact that it is moderately difficult to breed this particular species in captivity. If you want to attempt to breed them in captivity it is possible with frequent water changes, a high quality diet containing lots of protein, and multiple females for one male to choose from. When this fish is ready to spawn they will reproduce fairly regularly. This maternal mouth brooder will lay a clutch of 20 to 90 eggs once every two months. The female lays her eggs on a smooth, flat surface such as a rock or a log. Once the male fertilizes the eggs the female takes the brood into her mouth and holds onto them for 3 to 4 weeks at which time the fry is able to accept micro worms and newly hatched brine shrimp. While the female is holding her clutch it is a good idea to move her to a private tank of her own. During the time that she is holding eggs or fry in her mouth she is not eating and will therefore lack energy to fight off any predators that are after her offspring. The key is to remove the female carefully, paying special attention not to cause her to spit out her brood before she is moved to the nursery tank. This could be a fatal mistake for the eggs or fry if other fish are around to eat them. 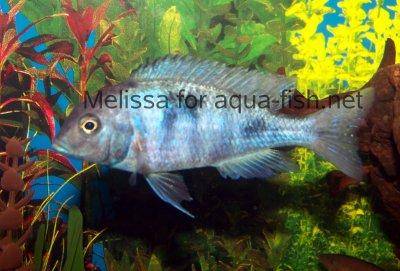 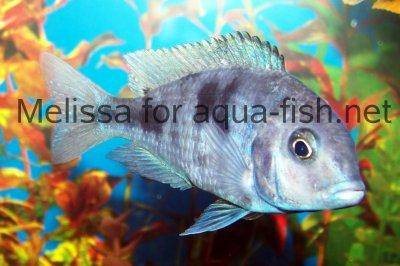