Parrot Cichlid - Description and tips on care with forum

This is an ultimate guide on raising Parrot cichlids; From water conditions through diet to answered FAQ and forum - it's on this page! You're welcome to ask and share experiences at the bottom of this page!

The parrot cichlid is not a fish that naturally occurs in the wild. It is essentially a man made fish so it does not have a scientific name. This hybrid cichlid is produced by combining other species of cichlids; some seem to think it is a combination of the red devil and the severum, while others may argue that it is the midas cichlid with the red head cichlid. There are several different varieties of parrot cichlids in existence today so I would not be surprised if both combinations were used to spawn this hybrid fish.

The parrot cichlid is named for the shape of its face which has the appearance of a parrot’s face and beak. The common parrot cichlid comes in a deep orange colouration which gave them the name “Blood Parrot Cichlid”. They also come in a whole variety of colours and patterns which will later be described in more detail. These fish grow to a maximum length of 8 inches (20.32 cm), sometimes more, and they can live for up to 50 years if they are good specimens and very well cared for.

Parrot cichlids are the offspring of different freshwater cichlids and are therefore themselves, freshwater cichlids. Although these hybrid fish have no natural environment the optimum temperatures to keep them in is 72 - 82°F (~ 22 - 28°C). They can thrive in a wide pH range between 6.0 and 8.0. Open swimming areas as well as individual hiding places among plants or in caves should be provided for the parrot cichlid. They are omnivorous and will accept any food offered to them including store bought flake and pellet foods, frozen and freeze dried foods, and live feeders small enough to fit in their mouth. These fish generate plenty of waste so a good filtration system is highly recommended.

The sexing of this species is unknown. There are some speculations that females may be a bit plumper but it has not been confirmed.

Parrot cichlids are egg layers and will prepare a smooth flat surface just as most other cichlids do. The female will lay eggs and the male will proceed to fertilize them. The only problem with male parrot cichlids is that most of them are born sterile and have no capability to reproduce. So once every few months the pair of parrot cichlids will go through the act of spawning without ever having a brood to show for. Some aquarium fish breeders will inject parrot cichlids with hormones to help upsurge fertility; it is an unreliable technique since it only works some of the time. It has been recorded that the female parrot cichlids can be bred with other species of cichlid males to produce successful spawning which is probably why there are so many different types of parrot cichlid varieties available.

Parrot Cichlids retail for fairly high prices, most specimens are sold for approximately $20 each. Those that are in perfect condition with perfect deep orange coloration will sell for even more than that.

Parrot cichlids need territories in which they can retreat to. Although this fish can be moderately contentious, it seems that they do have some trouble defending themselves. This is because this is a hybrid species, and it is common for them to be born with an array of different birth defects. Their organs such as their spines and swim bladders can be deformed at birth. The fish that are born with these deformities learn to conform to their handicaps and learn to live with what they have. Parrot cichlids, born with deformed mouths learn to crush food in their throats because their mouths cannot move so they lack the ability to chew. These fish have deformed spines thus their high backs, so they learn to maneuver through obstacles even though they do so with less grace than normal fish. This fish might be handicapped he is not necessarily aware of it.

I once rescued a parrot cichlid that was about to die. I found him in a pet shop with a bunch of other parrot cichlids. This particular parrot was the weakest one in the tank and the others were picking on it profusely. His mouth was deformed and his tail was severely shredded. There was a fungus growing where pieces of his tail were missing. I took him home and nursed him back to health in my quarantine tank. Once the fungus was gone and his tail healed back to normal, I let him live in the big aquarium with the rest of the cichlids. He was one of the bigger fish in this fish tank at the time. There was a convict, flowerhorn, peacock, and red jewel cichlid. It was a fairly new aquarium setup, and before I had stocked the cichlids in the tank, there were only a few bottom feeders. The parrot got used to being around other fish again and started to come out of hiding more and more often. Eventually he and the flowerhorn teamed up to rule the whole aquarium. Now the parrot cichlid and the flowerhorn are the two biggest fish in the aquarium. The parrot is the king of the tank and he is living his life as happy as can be.

There is a lot of controversy concerning the breeding of this type of fish. It is one that is highly debated in the aquarium industry. Many aquarists believe that these fish should not be bred because it is a species that was never meant to be. But is it not the same thing when horses are bred with donkeys to produce mules? Why should this species not be bred if mules still are produced? There is nothing to keep the different cichlid types from breeding naturally in the wild if they cohabitate in the same environment. On the other hand, dying the bubble gum, coloured parrot cichlids is not humane. Dying these fish for ornamental purposes can shorten the life expectancy of the fish. They dyes used are not applied in a harmless manner and it is not healthy for the fish so this practice is severely disagreeable. 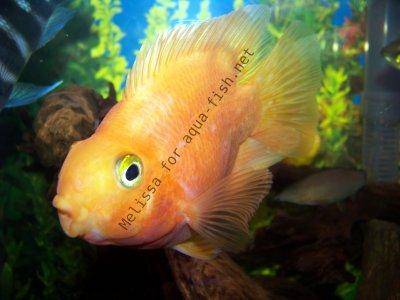 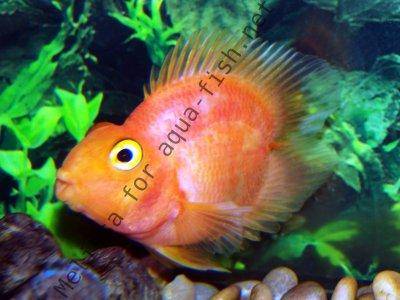 Parrots are shy at first 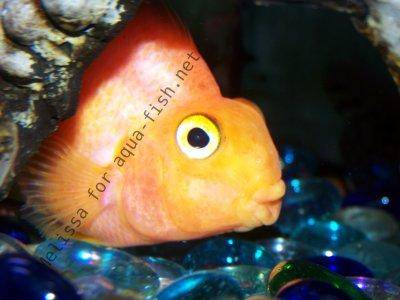 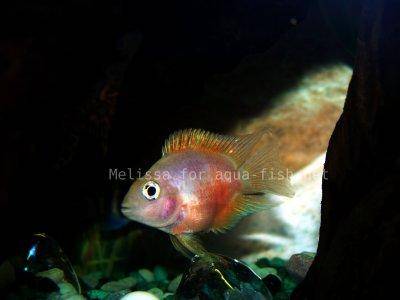 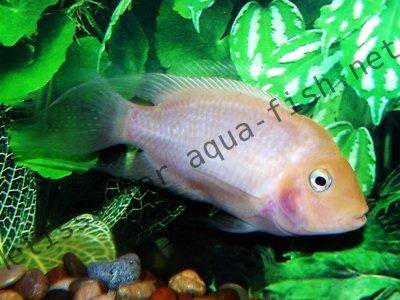 On March 20th 2011 we added the below-shown answers here due to merging aqua-fish.net/answers with articles available on Aqua-Fish.Net. You're welcome to submit your own questions, use a form at the bottom of this page for this purpose, please. Ensure that your questions are unique, please.