This article is a guide on raising Guppies with FAQ attached at the end of the article. You're welcome to ask questions or share experiences at the bottom of this page!

Poecilia reticulata also known as guppies, are among the most commonly kept fish in the aquarium industry today. Nicknamed, the “million-fish” the guppy is known to be a highly reproductive species that readily spawns in any given environment. Guppies are in the Poecilia family and are a live-bearers which means the females birth to live fry after being inseminated by a male. This fish is selectively bred for the purpose of developing a unique array of color combinations and finnage displays. The excitement of breeding these interesting little live bearers is to see what kinds of combinations will be produced next.

The guppy comes from various freshwater regions in South and Central Americas as well as the Caribbean, and is easily adaptable to a wide range of temperatures between 66-82ºF. They thrive in soft or hard waters of neutral to alkaline pH (7.0-7.5) growing up to 2.5 inches in length. Guppies are a non-aggressive species who like to live in a well planted tank containing no less than 20 gallons of water, with other small non-aggressive species. Flowing, well-filtered water is required for optimum guppy care. They will eat just about any type of foods that are fed to them including fresh or frozen brine shrimp, live insects small enough to fit in their mouths and prepared flake foods. Aquarium bred guppies are definitely a lot different from those that are wild caught. The elaborate displays of colorful fins are a direct result of carefully selective breeding. Wild caught guppies known as Endler’s livebearer are dark-olive green to gray in color and their fins are shorter, not as elegant. In the wild, this fish is known to live in fresh and brackish water so aquarium salt is recommended as a part of keeping them in their optimum conditions.

Guppies were introduced to several other parts of the world as a way to control mosquito and insect populations. They eat the mosquito larvae once they hatch from their eggs on the water’s surface. This process only works because guppies were so highly adaptable to the different water conditions they were introduced into.

The guppy is called “million fish” specifically for its capability to reproduce again and again, resulting in what seems like a million little fish. This species is a live-bearer which means they give birth to live young. Once inseminated, a female guppy can store sperm in her body allowing her to get pregnant over and over without ever having to mate again. It’s been known for females to be brought home to aquariums that lack any males, and still have been able to reproduce. It is really quite a remarkable trait that has set these fish apart in the industry.

Upon getting pregnant the female should be separated from the male if there was even one present to begin with. You can tell a female is pregnant because she will develop a dark spot on her belly known as the “gravid spot”. Her belly will become swollen until the point where it looks like she might burst. Placing the female in a breeding tank might be beneficial at this point because this species see fry as food rather than babies. They do not exhibit great parenting skills like some other fish do, instead the young are left to fend for themselves and hide for their lives. Breeding tanks provide protection, allowing the fry to sink down into a crevasse where they cannot be reached by the mother. Once the female is done birthing her fry it is easy to separate her out and to transfer the fry to a tank of their own. Guppies will have an average of 40 babies in each brood with an average of 7 broods or more in a life span. The gestation period lasts an average of 28 days and a female can be re-impregnated from her stored up sperm within hours of giving birth.

Newly born fry are fully capable of eating small foods and fending for themselves. Parents are no longer responsible for the care of their young once they are born so they are responsible for themselves and have to avoid danger and innately know how to survive. It takes an average of 6 weeks for sexual maturity to develop although mature males can impregnate females at a younger age. This is inadvisable so it is best to keep males separate from females. It is also recommended to separate males and females from the same parents and to keep them separate. This is to prevent inbreeding which can cause undesirable traits to occur in deformed offspring such as crippling and sterilization. To avoid these occurrences it is best to carefully place unrelated, mature guppies with one another.

Guppies are selectively bred for the different phenotype combinations that produce desirable traits in colors and fins. Guppies come in an assortment of color combinations with different colors, patterns and tail designs. They are named according to the colors of their tails and not their bodies. The combinations are seemingly endless when it comes to all the different types of guppies, which is why it is such a fascinating industry.

Different tail shapes include (but are not limited to):

Different tail patterns include (but are not limited to):

The front half of the guppy’s body is usually gold, grey or silver but it could also be other color variations depending on the individual. Virtually every color is represented in the décor of the guppy species from shades of primary and secondary colors to the whole spectrum in between. The colors are displayed in a multitude of patterns and combinations of patterns.

Different patterns include (but are not limited to): 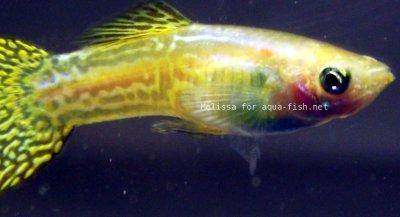 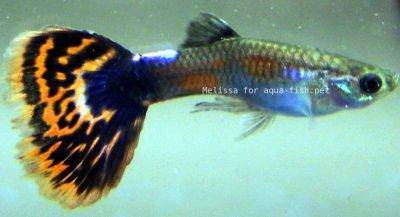 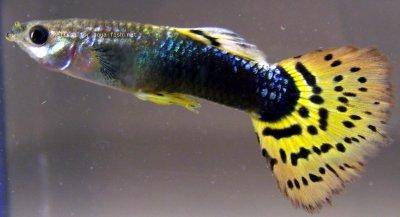 Other pages devoted to Guppies

Since visitors of Aqua-Fish.Net are often looking for specific answers, we've answered the below-shown questions and we'll answer other questions about Guppies (new questions must be unique and unanswered, of course). The answers listed below were originally published at aqua-fish.net/answers. (some of the questions may be partially answered above)