This article explains how to take care of Glass bloodfin tetras including breeding, sexing, tank set-up and feeding; You're welcome to share your experiences at the bottom of this page, eventually you're welcome to ask question - we will gladly answer!

This Tetra originates in South America, namely the Amazon river - in the inflow Maderia which means the natural environment for these fish is a tropical freshwater aquarium, preferably South American Blackwater Stream biotope. Speaking generally these tetras aren't very demanding, nor hard to keep, however they require stable conditions with general water hardness (dGH) of 10° and a little alkaline water with pH slightly over 7 (7.1 or 7.2 is just fine). I've kept Glass bloodfin tetras in acidid water with very negative results, they started turning white and kept dying slowly. When it comes to temperature, these tetras are very adaptable which means anything between 22 and 28°C is OK (72-82°F). As the note regarding biotope implies, Glass bloodfins prefer tanks with hiding places as well as with places where it's possible to swim freely as they're little athletes that love to chase each other, but also love to stay in one place almost 12 hours a day - this also depends on their company, if there's a fish that keeps chasing them, naturally these tetras won't stay in one position. As with other Tetras, Glass bloodfins aren't demanding in terms of space as they group and prefer to stay in shoals as much as possible - all in all, a 100 liter tank can house even 50 of these small creatures and still such a tank won't be overcrowded. Never keep one or two of these tetras (it's similar with all tetras) as they will be shy and won't come out of hiding places as often as expected. We always recommend to keep at least 6 specimens of each specie, however 10 or 20 of same species is more than welcome! As mentioned previously, these fish don't require much space, however housing them in undersized tanks isn't wise as they need space - especially length - for chasing each other. Glass bloodfins aren't aggressive, however they chase each other and play together often which means they really need open spaces without decorations and sharp edges, otherwise they may hit such objects which usually leads to injuries including losing one or both eyes. A 40 liter or smaller tank isn't recommended - use a 80 liter display tank at least.

The aquarium must be covered, because the Glass bloodfin fish is a very good jumper. The shape of the body is made of muscle and it’s specialty is swimming really fast and jumping out of the aquarium when they get scared. This happens especially when you clean the tank, or if you put your hands into the fish tank with or without any reason - this is the reason of growing live plants in the tank; Tetras and also other fish species feel safe when hidden inside of overgrown aquatic plants! Once again, bear in mind that this species must to be kept in shoals, because it is a shy and fearful fish. Despite the previously mentioned fact, you should place your aquarium into a place, where you stay or other people stay often. Simply it must be a trafficked place, otherwise these tetras will be scared of every new movement in front of their aquarium. It is because if the fish is accustomed to plenty of movements, it will be not as nervous as if it was in a quiet place. The ability to get scared easily is a problem a bit. The behaviour when Glass bloodfins get scared includes trying to jump out from the tank when you are performing regular maintenance inside, and they basically are in panic and they try to hide anywhere possible. Eventually they try to hide themselves in the substrate, in the plants and sometimes they stuck in there and they can´t get out of such a place. I do even think, that they sometimes try to act dead, but I´m not 100% sure. No aquarist should be taking actions that lead to this behaviour, it's a risk and unnatural for the fish!

Glass bloodfins measure from 5 to 6 cm when fully grown (roughly 2 inches) and due to their colouration these fish look terrific in any fish tank no matter it's a community aquarium or a dedicated tank. It is because they have see-through body with red tail fin. They have an about half centimeter big spot on their gills. This spot is actually the most interesting part of the body as it produces reflexing. Surely if you'd keep 1 specimen only, colours of such a fish would be pale due to non-existent shoal (tetras feel fine when in shoal, they're shoaling fish) - strength and beauty is in the total number of fish! As they move in shoal with their red tails, they really look beautiful. Definitely this fish isn't as coloured as some Malawi cichlids, thus aquarists who keen on colouration only should avoid keeping Glass bloodfin tetras. Bear in mind that colours do enhance with plants and background.

The Glass bloodfin species will accept every offered kind of food. Live, frozen, dried. We feed them flakes, which they like to eat from the surface together with Black skirt tetras. They look like little piranhas when eating. This is not due to lack of feeding, they're naturally very hungry as their stomach is quite small and thus feeding these tetras twice a day is perhaps the best option - feed them in small amounts. If you just introduced new Glass bloodfins to your fish tank don't expect them to come to the surface at the feeding time as they'll be shy a couple of days or weeks until they settle down in their new home. As mentioned already, granules or pellets, bloodworms, insects or worms - these foods are going to be accepted by Glass bloodfin tetras!

This tetra prefers breeding in the morning hours, when the aquarium is lighted with sun and when they are in shoal, not in couple. The breeding tank shouldn´t be small, maybe 30x30x80 cm is optimal. Spawning happens under the water over or in the soft aquarium plants like Java moss or even between silk plants. During one spawn they can lay up to 200 or even 350 eggs. The eggs are clear and not very adhesive, only few stay stuck to the spawning place. The eggs usually fall down to the substrate. They eggs are about 0,90 mm long and they hatch by the temperature 27°C very soon, even after 14 - 15 hours and little fry are about 2,25 mm long. They detach sticky secretion on their heads and they try to stuck to the walls of the aquarium or on the plants on shaded places. Sometimes they stuck to the water surface. In the age of 84 or 85 hours they swim free. From this time you have to feed them with live nature food, or just hatched brine shrimp (Artemia salina). The breeding behaviour is similar to the breeding behaviour of the Aphyocharax anisitsi and Rathbuni species. They creep on the plants, aquarium glass or aquarium equipment with the bellies up side down. But they grow faster than Anisitsi and Ratgbuni. When they are 7 to 8 weeks old, they start to swim just like their parents in shoals in the whole aquarium. In this age they can be fed crushed TetraMin for instance. With good food they grow up after 4 to 8 months. If they get less food, they grow up after 8 to 10 months. You should take care, if they have crystal clean water, the water should not contain much nitrogenous and the pH should be about 7 to 7.8, all the time while the little things are juveniles.

This tetra needs to be kept in a species shoal. However they like the company of Black skirt tetra - Gymnocorymbus ternetzi, or Flame tetra - Hyphessobrycon flammeus. Be careful, if kept with neon tetras, Glass bloodfins will probably die. It's assumed it is because of the fact that neons detach some kind of secretion which is acid and Glass bloodfins don´t like acid water. Black and Flame tetras like harder water just like bloodfins do. They can be kept with some aggressive fish too. I would recommend a fish with smaller mouth than bloodfins are (Gouramis or Paradise fish are just good tankmates with Glass bloodfins). Lastly, Glass bloodfin are very fast fish and it is difficult to catch them, especially in a big aquarium with lot of plants. 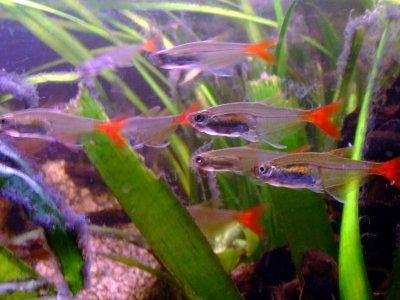 Some information is from magazine Akvarium Terarium - article by Stanislav Frank, 1982/1