Fish tank dividers are used to separate areas of the aquarium where defined spaces are required. The ability to break up sections in the fish tank can come in handy for breeding purposes, segregating feuding fish, and conserving aquarium resources.

Dividers for breeding pairs and livebearers

Many species of fish are known to eat their young not long after giving birth or laying eggs. Fish tank dividers are often used to separate fry and eggs from their parents in order to protect them from being consumed. Even if the parent couple is not savage enough to eat their off spring, it is highly possible that another fish in the tank will be looking for an easy snack. Many species of fish are known to exhibit excessive aggression while breeding. One example of this is a pair of spawning convict cichlids. These cichlids will go out of their way to protect their young even if it means attacking a fish 2 or 3 times its size.

By providing a temporary wall to divide the spawning pair from the rest of the tank, protection is provided for all parties involved. When it comes to protecting the young from their parents, there are other fish tank dividing devices that are specifically designed for breeding purposes. For egg scattering fish there are screens with holes just large enough for the eggs to safely sink down into so that the adults are not able to reach retrieve them from the bottom of the tank. These dividers are meant to lay flat just above the substrate with enough space for the eggs to settle in.

Mouthbrooders can also be separated from predators that may attack the fish while in a weakened state. Since mouthbrooding species do not eat while holding a clutch of eggs in the mouth, such a fish has less energy to defend itself against aggressive fish that are after the brood. With own sanctuary sectioned off by a fish tank divider she can safely look after the juveniles without the threat of predators.

Livebearers can benefit from fish tank dividers as well. Breeding traps that require the birthing mother to be contained within it can help save the fry. The birthing divider should be placed on the inside of a nursery tank in which the fry are expected to live until they are old enough to fend for themselves. Just before the mother is about to birth her fry place her in the birthing trap. As she gives birth to each baby, they are able to swim away through the narrow slats to safety where she cannot eat them. Once she is done birthing her young, the mother can be safely moved back to her regular aquarium. These live bearer divided birthing traps can be purchased in aquarium retail stores or online for $5-10. It is well worth the small cost if you are planning on raising the fry.

Many fish are known to exhibit aggression toward other fish whether they are of the same or different species. For example, it is common for fish such as male bettas to be aggressive toward one another if they are kept together. To prevent them from hurting each other, an aquarist can provide private spaces by partitioning one aquarium into several different sections using fish tank dividers.

Dividers can be used to separate pairs of fish as well. The Ram cichlid can exist in groups containing multiple amounts of both males and females. They can do this relatively peacefully for a period of time. This species forms monogamous pairs when they are ready to start reproducing and they form a chain of command which establishes which group is the alpha couple. In most cases the alpha pair eliminates other couples by killing them in order to be the only pair of ram cichlids in the aquarium. By using a fish tank divider to separate the pairs from one another, all monogamous couples can be safely kept.

A DIY fish tank divider made of fish net 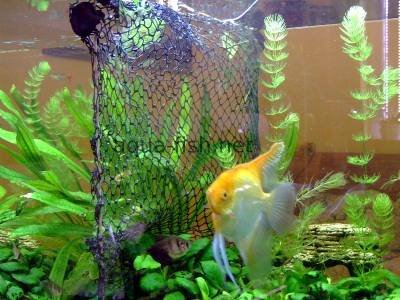 An aquarium setup can get fairly expensive when you consider all of the different components that make it run efficiently and effectively. When adding up the cost of all of the equipment needed, it is not always practical to purchase a separate aquarium setup for one or a few fish. Supplies such as water filters, lighting fixtures, and aquarium heaters can all be used to maintain multiple divisions of one collective space. Fish tank dividers are designed to separate areas while still letting water flow from one compartment to the next. This allows one filter to clean and aerate, and one heater to regulate the temperature, for all of the water in the aquarium, all while still being divided. Additionally, different species may require different habitats despite having similar water requirements. Fish tank dividers allow you to create different aqua-scapes in one aquarium. You then have the freedom to create plenty of caves and territories while still being able to provide a separate open swimming area.

Be sure that the fish tank divider is firmly secured before adding fish to either side. The last thing you want is for two aggressive fish to meet in common waters injuring one another. It would also be a shame if the fish tank divider fell over on one or more of the aquarium’s inhabitants. Do not forget to provide food for each individual divide in the aquarium since food is most likely not to pass through each partition despite the unrestricted flow.